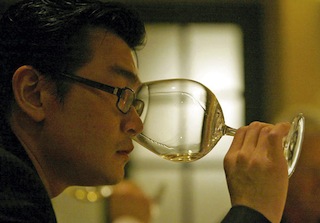 Indonesian wine forger Rudy Kurniawan was sentenced Thursday to 10 years in prison after he was found guilty of manufacturing fake vintages and selling them for millions of dollars.

The 37-year old, once considered one of the top five wine collectors in the world, was convicted in December of blending hundreds of bottles in his kitchen and selling them as rare vintages.

After less than two hours of deliberations, a New York jury had also convicted him of fraudulently obtaining a $3 million loan.

The two convictions carried a maximum sentence of 20 years each.

It has been an astonishingly fall from grace for a man once considered one of the top five wine collectors in the exclusive world of vintage wine, but who has no legal status in the US.

He built his success on an exceptional palate, capable of identifying and memorizing the world’s finest wines beloved by the richest people on the planet.

But he was found guilty of defrauding buyers and collectors from 2004 through 2012 by selling counterfeit bottles of purportedly rare and expensive wine.

Prosecutors branded him an arch liar motivated by greed, a man who made millions of dollars selling bogus vintages blended in the California home he shared with his Chinese mother.

The allegations against Kurniawan surfaced over an April 2008 auction in New York where he had offered 97 purported bottles of Domaine Ponsot for sale for between $440,500 and $602,000.

After allegedly trying to sell more dubious wine at auction in London via an intermediary in 2012, Kurniawan was arrested.