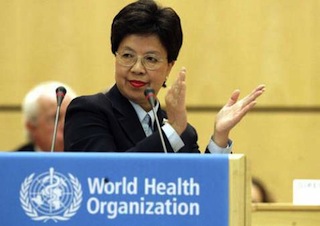 The decision after a two-day emergency session behind closed doors in Geneva means global travel restrictions may be put in place to halt its spread as the overall death toll nears 1,000.

The WHO move comes as US health authorities admitted on Thursday that Ebola’s spread beyond west Africa was “inevitable”, and after medical charity Doctors Without Borders (MSF) warned that the deadly virus was now “out of control” with more than 60 outbreak hotspots.

WHO director-general Dr Margaret Chan appealed for greater help for the countries worst hit by the “most complex outbreak in the four decades of this disease”, echoing an earlier claim by MSF that the “epidemic is unprecedented in terms of geographical distribution, people infected and deaths”.

“I am declaring the outbreak a public health emergency of international concern,” Chan said, stressing the “serious and unusual nature of the outbreak”.

Even as a possible new case was reported in the east African country of Uganda, she said only a small part of the continent had been affected. “This alerts the world to the need for high vigilance,” she said.

The suspected victim in Uganda was stopped on arrival at the country’s main Entebbe airport after showing signs of fever on a flight from war-torn South Sudan. Ugandan health ministry spokesman Rukia Nakamatte said on Friday that they were awaiting results of tests for the disease.

In another worrying development, Benin — to the west of the main affected countries — said it had placed two patients with Ebola-like symptoms in isolation and was waiting for test results to establish if the pair were infected.

Ebola has claimed at least 932 lives and infected more than 1,700 people since breaking out in Guinea earlier this year, according to the WHO.

States of emergency were in effect in Liberia, Guinea and Sierra Leone.

Soldiers in Liberia’s Grand Cape Mount province — one of the worst-affected areas — set up road blocks to limit travel to the capital Monrovia, as bodies reportedly lay unburied in the city’s streets.

President Ellen Johnson Sirleaf said people should expect certain rights to be suspended as the country imposes “extraordinary measures” necessary for “the very survival of our state”.

In Sierra Leone, which has the most confirmed infections, 800 troops were sent to guard hospitals treating Ebola patients, an army spokesman said.

Two towns in the east of Sierra Leone, Kailahun and Kenema, were put under quarantine and nightclubs and entertainment venues across the country were ordered shut.

Public sector doctors in Nigeria suspended a month-long strike with fears rising that the virus was taking hold in sub-Saharan Africa’s most populous country. The deadly tropical disease has already killed two and infected five others in Lagos.

As African nations struggled with the scale of the epidemic, the scientists who discovered the virus in 1976 have called for an experimental drug being used on two infected Americans to also be made available for African victims.

One of the three, Peter Piot, director of the London School of Hygiene and Tropical Medicine, said “African countries should have the same opportunity” to use ZMapp, which is made by US company Mapp Pharmaceuticals.

Ebola causes severe fever and, in the worst cases, unstoppable bleeding. It is transmitted through contact with bodily fluids, and people who live with or care for patients are most at risk.

The two infected Americans, who worked for Christian aid agencies in Liberia, have shown signs of improvement since being flown to a specialist hospital in Atlanta, Georgia. They are being given ZMapp, according to reports.

There is no proven treatment or cure for Ebola and the use of the experimental drug has sparked an ethical debate.

US President Barack Obama said it was too soon to send the experimental drugs to west Africa.

“I don’t think all the information is in on whether this drug is helpful,” he said Wednesday.

Nigeria’s Health Minister Onyebuchi Chukwu has asked the US about getting the drug, but Spain has voiced caution about the serum.

US regulators meanwhile loosened restrictions on another experimental drug which may allow it to be tried on infected patients in west Africa.

Canada-based Tekmira said the US Food and Drug Administration changed the classification of its drug TKM-Ebola from full clinical hold to partial hold.

US health authorities also warned Ebola’s spread to the United States was “inevitable” due to the nature of global airline travel, but that any outbreak was not likely to be large.

The worsening outbreak prompted the United States to order the families of embassy staff in Liberia to return home, with the State Department also warning US citizens not to travel to Liberia.

First discovered in 1976 and named after a river in what is now the Democratic Republic of Congo, Ebola has killed around two-thirds of those infected, with two outbreaks registering fatality rates approaching 90 percent. The latest outbreak has a fatality rate of around 55 percent.