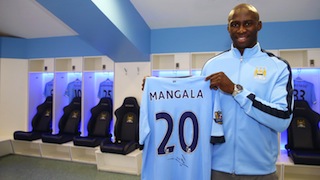 The 23-year old Paris-born Mangala becomes the sixth signing of the summer, and will quickly re-join his old Porto teammate Fernando at the Etihad Stadium.

“City is a top club in Europe. For me, it was an important step to leave Porto and join Manchester City in order to continue my progress. I want to win titles and I believe I can do this. I am ambitious and this is why I am here,” Mangala said.

“I’m very happy to come to England because for me, the Premier League is the best league in the world. It is a very intense and very aggressive competition. There are plenty of goals, so it is also really nice to watch and I can’t wait to get started!

“The fact that Fernando is here is better because I played with him at Porto but there is also other players that I know like (Bacary) Sagna, (Gael) Clichy and (Samir) Nasri.”

City manager Manuel Pellegrini added: “I’m delighted to have added a player of Eliaquim’s quality in the squad ahead of the new season.

“He is already a fine player but in my opinion, he has all of the mental, physical, technical and tactical attributes to become one of Europe’s very best defenders.

“Eliaquim is a player I believe will make an immediate impact in the Premier League, thanks to his physicality, his reading of the game and quality on the ball.

“I think he will prove to be a great signing for us.”

Mangala made his France debut in a 1-0 defeat to Uruguay in Montevideo in June 2013.

Although included in the World Cup squad, the defender didn’t make it off the bench in France’s run to the quarter-finals.