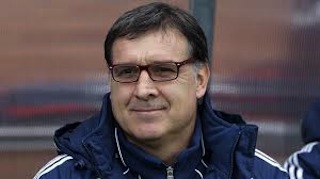 Gerardo Martino was named coach of Argentina on Tuesday replacing Alejandro Sabella who stood down after they lost 1-0 to Germany in July’s World Cup final.

Martino, 51, gets the job despite a trophyless season with Spanish giants Barcelona which resulted in him being sacked.

“The coach Gerardo Daniel Martino will on Thursday take up his functions as technical director of the national side,” read a statement on the Argentinian Football Association (AFA) website.

“He replaces Alejandro Sabella whose contract with the AFA ended after the World Cup in Brazil.”

Martino’s first target will be next year’s Copa America in Chile.

Sabella, who took over after Argentina failed to win the Copa America on home soil in 2011, guided the Argentinians to their first World Cup final since 1990.

However, despite losing narrowly to the Germans – a Mario Goetze goal in extra-time proving the difference, the highly-praised Sabella refused the AFA’s offer to sign a new contract taking him up to 2018.

Martino for his part earned respect for his handling of the Paraguay national side whom he guided to the 2010 World Cup quarter-finals.