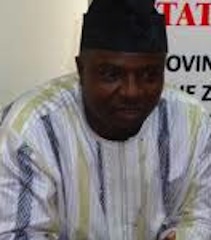 The Chairman of Yaba Local Council Development Area, Jide Jimoh, has described the re-election of Ogbeni Rauf Aregbesola, governor of Osun State, as true  democracy where people voted massively for their candidate despite the threat by security agents.

Jimoh’s message was contained contained in a press statement signed by his media aide, Mr Debo Omilani on Sunday, 10 August, 2014.

He said, “people expressed their minds to President Jonathan and the entire Peoples Democratic Party (PDP) through their votes, that they cannot be intimidated”.

The council boss expressed satisfaction on the election, saying it was free and fair.

He assured that the people of Osun State will enjoy APC government. “Osun election has shown that the 2015 general election will be a surprise game for the ruling party at the centre.

“I congratulate Governor Aregbesola and the people of Osun for choosing the best man who is capable of delivering dividends of democracy to them,” the Yaba LCDA boss said.

He urged the people of the state to continue  their support and trust for the Aregbesola administration for a great positive change in their lives.