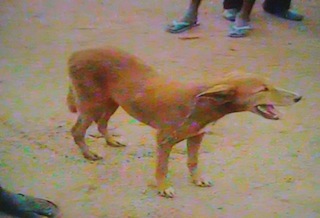 The dog that was abused

A 19-year old boy (name withheld), was Tuesday arrested at Iguosa, a suburb community in Benin City, located in Ovia North-East local government area of Edo State, for allegedly sleeping with a dog.

The teenager who confessed to sleeping with the dog, said he lives in Uselu area of Benin but often comes to Iguosa to look for menial jobs. He said the dog was following him as he moved along the street in the community and he thereafter took the dog to an uncompleted building where he had canal knowledge of the animal.

“I was going on the street and the dog kept following me and I carried it like a baby and thereafter I took it to an uncompleted building where I did what I did to it. It was there that one man came into the building and arrested me,” he said in pidgin English.

A member of the community, George Ogbonwan‎ who narrated how the suspect was caught, said the culprit was romancing the dog but he thought he wanted to steal it, not knowing that the lad had a different plan.

“When I saw the young man carrying the dog like a baby, I decided to tell the owner and advised him to go into the uncompleted building. I told him to go round the house while I went through the other side and we saw him having sex with the dog,” he said.

Also speaking on the incident, the owner of the dog, Mr. Garuba Samari, who described the incident as an abominable act, said the boy should be taken to the security agents who would decide what to do to him, adding that, “the dog has to follow him, I have nothing to do with the dog again.”

The Odionwere (head) of Iguosa community, ‎Pa Clifford Igiehon, described the act as a taboo to the community. He called for a proper screening of the young man to ascertain if he is normal.

“It is an abomination against the community. The young man came from Uselu in Benin City and I don’t know why he decided to commit the act here in this community and we don’t want to see him here again so that he does not come and spoil our people,” he said, adding that, the suspect would be handed to the police for further investigation and to find out if he has contacted any dicease after sleeping with the dog.

‎The secretary of the community, Festus Obadiaru, who also described the act as a taboo and unprecedented in the community, said the suspect would be handed to the police authority for further investigation.