Barcelona 'keeper ter Stegen out for up to three weeks 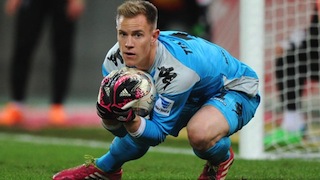 Barcelona’s German goalkeeper Marc-Andre ter Stegen will be sidelined for two to three weeks with a back injury, the Catalan club announced on Friday.

Ter Stegen, 22, signed in the close season from Borussia Moenchengladbach, is suffering “a small fracture” to a vertebra in the lower back.

Following persistent pain after a blow in training 10 days ago, he underwent medical tests on Friday, which revealed the problem, the club website reported.

Barcelona also signed Chilean goalkeeper Claudio Bravo in the close season as another replacement for the departing Victor Valdes and Jose Manuel Pinto.