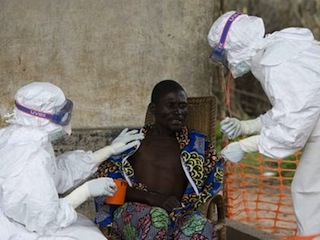 Athletes from Ebola-hit countries in west Africa have been barred from competing in some sports in the Youth Olympics that open in China at the weekend, the International Olympic Committee and Chinese organisers said Friday.

“Athletes from affected areas will not compete in combat sports” and “it was also decided that no athletes from the region would compete in the pool,” they said in a statement.

The decision, which affects two athletes in combat sports and one in pool events, was made “with regard to ensuring the safety of all those participating” in the Games taking place in the eastern Chinese city of Nanjing, they added.

They did not reveal the nationalities and names of the athletes affected by the decision.

According to the Youth Olympics’ website, there were a total of 25 people on the team lists of Ebola-hit Sierra Leone, Liberia, Guinea and Nigeria.

Guinea’s four-name team was made up of two track and field athletes, swimmer Alhoussene Sylla and judoka Mamadama Bangoura, both of whom are 16 years old.

The two-name team from Liberia included a track and field athlete and 15-year-old swimmer Momodou Sombai.

Nigeria’s squad was the largest, with 13 members, all of them track and field or beach volleyball competitors, apart from 16-year-old wrestler Bose Samuel.

It was not immediately clear how many of the 25 competitors had already arrived in Beijing, nor why only one swimmer had been barred, given that there were three from the affected countries.

In their joint statement, the IOC and the organisers said that all those in delegations from west Africa “will be subject to regular temperature and physical assessment” during the Games.

“We have been reassured by the health authorities that there have been no suspected cases and that the risk of infection is extremely unlikely,” they added.

The Youth Olympic Games are being held in Nanjing, China’s former capital, from August 16 to 28, and feature more than 3,700 competitors aged 15 to 18 — some of whom hope to build towards a place in the 2016 Olympic Games to be hosted by Brazil.

The world’s worst-ever outbreak of Ebola in west Africa has killed 1,069 people so far and sparked international alarm, with several major airlines cutting flights to the region.

Guinea, at the epicentre of the epidemic, has declared a “health emergency” and imposed strict border controls, and the United States has ordered diplomats’ families evacuated from Sierra Leone.

The World Health Organization says the Ebola outbreak is being vastly underestimated and “extraordinary” measures are needed to contain the spread of the virus.