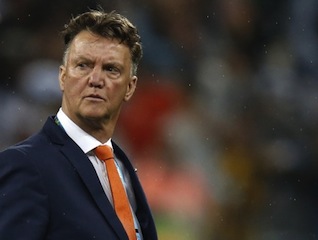 Louis van Gaal’s Manchester United reign got off to a false start on Saturday as Swansea City won 2-1 in the season’s opening Premier League game at Old Trafford.

Van Gaal was taking charge of his first competitive game as United manager, but his new side exhibited many of the same failings from last season — when they finished seventh — as they slumped to a surprise defeat.

South Korea midfielder Ki Sung-yueng exploited inattentive marking to give Swansea a 28th-minute lead with a left-foot shot from the edge of the box.

It gave Swansea back-to-back wins at Old Trafford, following their shock FA Cup success in January, and was a reversal of United’s 4-1 win at the Liberty Stadium on the first day of last season.

Lingard’s day was to last only 24 minutes, however, as he was forced off after appearing to jar his knee in a challenge with visiting captain Ashley Williams.

United bossed possession in the first half, but Swansea struck from their first sight of goal, with Ki stroking home a lay-off from Sigurdsson.

Swansea’s fans burst into a chorus of ‘You’re getting sacked in the morning!’ aimed at Van Gaal, who sat impassively in his seat in the dug-out.

The Dutchman introduced Nani in place of striker Javier Hernandez at half-time, and United responded immediately.

Juan Mata’s right-wing corner was flicked on by Phil Jones and Rooney hooked home a spectacular close-range volley at the back post.

Rooney came close to putting United ahead with a free-kick that hit the outside of the post in the 66th minute.

But it was Swansea who claimed the winning goal when Icelandic midfielder Sigurdsson — back at the club after two years at Tottenham Hotspur — slammed home from Wayne Routledge’s mishit volley.

With manager Tony Pulis having left Palace on Friday after a reported disagreement with co-chairman Steve Parish, assistant coach Keith Millen will be in temporary charge for the trip to the Emirates Stadium.