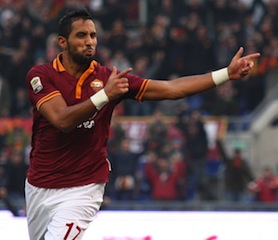 Bayern Munich are lining up a deal to bring in Roma’s Moroccan international defender Mehdi Benatia as a replacement for injured Spanish international Javi Martinez, German media reported on Sunday.

German websites Sport1 and Sport Bild Plus both indicated that Bayern were looking to tie up a 30 million euro (£24 million, $40 million) move for Benatia, also a reported target for English Premier League duo Manchester United and Chelsea, in the coming days.

Bayern coach Pep Guardiola admitted on Saturday the German champions were planning to dip into the transfer market to fill the void left by Martinez, who was ruled out until 2015 after rupturing knee ligaments in the German Super Cup defeat to Borussia Dortmund in midweek.

According to Sport1, Italian daily Gazzetta dello Sport reported in June that the German champions had made a bid of 33 million euros for Benatia.

The 27-year old centre-back is currently under contract with Roma until 2018 having joined from Udinese last July.

Bayern, who begin the defence of their German Cup title on Sunday away to third-tier Preussen Münster, are also looking for cover at right-back with Rafinha facing a lengthy spell on the sidelines after damaging ankle ligaments.