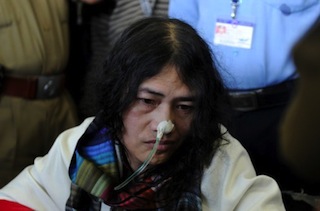 An Indian court Tuesday ordered the release of a woman who has staged a 14-year hunger strike in protest at human rights abuses in the country’s remote northeast, her lawyer said.

“The court has set her free,” lawyer Mani Khaidem said of Irom Sharmila, who was arrested shortly after beginning her protest.

Sharmila, known as the Iron Lady of Manipur for her unwavering and non-violent protest, has refused food and water for almost 14 years to draw attention to abuses allegedly committed by the military.

She began her fast in November 2000 after witnessing the killing of 10 people by the army at a bus stop near her home in northeastern Manipur, which is subject to the draconian Armed Forces Special Powers Act.

She was arrested on charges of attempted suicide and was sent to a prison hospital where she was force-fed via a nasal drip several times a day.

Babloo Loitangbam, a human rights activist in the northeast who is close to Sharmila, said the court had accepted that the charge was not sustainable.

“There has been a consistent position where activists have been saying that Sharmila is not taking her life, she is making a political point which is to repeal the Armed Forces Special Powers Act,” he told the NDTV network.

Sharmila also faces similar charges in the capital New Delhi where she has staged a hunger-strike in the past.

The act, which covers large parts of northeastern India and the restive state of Kashmir, gives Indian forces sweeping powers to search, enter property and shoot-on-sight and is seen by critics as cover for human rights abuses.