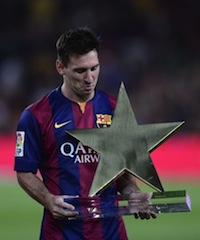 Luis Suarez made his first appearance for Barcelona after his move from Liverpool for a reported 95 million euros (£75 million, $127 million) as the Catalans hammered Mexican side Club Leon 6-0 in a friendly on Monday.

The Uruguayan striker, who won’t be able to play in a competitive game for Barca until October after his appeal against a fourth-month ban for biting Italian defender Giorgio Chiellini during the World Cup was rejected last week, replaced Rafinha Alcantara 14 minutes from time.

Barca were already leading 4-0 thanks to goals from Lionel Messi, Munir El Haddadi and a double from Neymar before Munir and Sandro rounded off the scoring.

“Thank you all for your affection.”

Barcelona sporting director Andoni Zubizaretta said that they would give him time to get used to his new surroundings.

“We will give him (Suarez) the time so that he can see he is integrating into the team and he will adapt to the team in training,” he told Barca TV.

Midfielder Andres Iniesta believes last season’s Premier League Player of the Year will not have any difficulty adapting to life alongside Messi and Neymar in attack.

“It is never easy when you come from another club, but, as I have said before, I think he will find a very healthy dressing room and I think he will adapt fine, because his talent is above everything else,” he said.

Despite his controversial past, which includes two previous bans for biting as well as a suspension by the English Football Association for racially abusing Manchester United defender Patrice Evra, Suarez was warmly received by the home fans as he made his entrance.

Earlier, Neymar and Messi made a telling impact in their first outings since their World Cup ended in a devastating back injury and defeat in the final respectively.

Messi headed the hosts in front inside three minutes from Neymar’s deflected cross.

The Brazilian striker then doubled Barca’s lead with a delightful chip from Andres Iniesta’s through ball before grabbing his second of the night when he backheeled into an empty net two minutes before half-time.

Munir replaced Neymar at half-time and he tapped home the fourth goal when Dani Alves knocked Ivan Rakitic’s ball over the top into the 19-year old’s path.

And moments after Suarez had made his entrance, Munir smashed home his second goal of the game with a powerful low finish before Sandro put the seal on a fine Barca performance in similar fashion a minute from time.