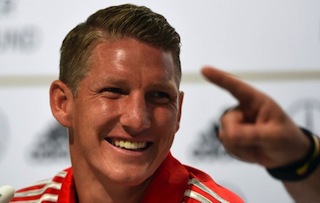 Bayern Munich chairman Karl-Heinz Rummenigge said on Tuesday that German World Cup-winning midfielder Bastian Schweinsteiger will be out for “several weeks” with a knee problem, according to SID, an AFP subsidiary.

“It won’t only be a case of one or two weeks, but rather a bit longer,” said Rummenigge, adding that “several weeks of patience” would be required.

Schweinsteiger is suffering from a ligament problem in his left knee and will miss Friday’s game against Wolfsburg which will see Bayern begin their defence of the Bundesliga title.

Rummenigge added that the 30-year-old could also miss Germany’s friendly with Argentina in a repeat of the World Cup final on September 3 and their opening Euro 2016 qualifier against Scotland four days later.