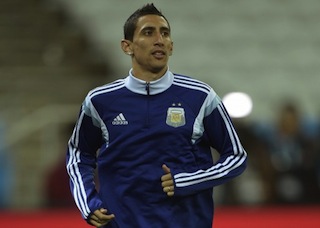 Atletico Madrid coach Diego Simeone claimed compatriot Angel di Maria is Real Madrid’s best player after the Argentine midfielder started on the bench as the Champions League finalists drew 1-1 in the first leg of the Spanish Super Cup on Tuesday.

There are runours that Di Maria will move away from the Spanish capital, given the wealth of attacking options after the arrival of World Cup star James Rodriguez, with Manchester United and Paris Saint-Germain reportedly interested.

However, Simeone claimed he is even more vital to Real than World Player of the Year Cristiano Ronaldo and Gareth Bale.

“In the first-half despite defending close to our area we had three or four chances to score a goal,” he said.

“The second half was more or less the same, with a little bit better play from Madrid with the introduction of Di Maria.

“That was logical because he is the best player they have. It is an important draw and allows us to play a for the trophy at home with a 50-50 chance.

“It is my opinion that Di Maria is Madrid’s best player for sure. His ability to change games in the middle of the park helps everyone else to play well.”

Real boss Carlo Ancelotti rebuked Simeone for failing to mention Ronaldo and Bale, who both scored as Real beat Atletico 4-1 after extra time in the Champions League final in Lisbon back in May.

“He has forgotten the World Player of the Year and Bale, who scored in Lisbon. He has forgotten many players, but it is true Di Maria is one of many great players we have.

“He is a Real Madrid player and I will use him as I think is best.”

Ronaldo was replaced at half-time due to a minor muscle injury, but Ancelotti is convinced the Portuguese won’t be sidelined for any prolonged period of time.

“He had a strain after the first-half and he wasn’t comfortable. We will evaluate him tomorrow and do all the proper checks, but it doesn’t appear anything too serious,” said the Italian.

Rodriguez had also surprisingly started on the bench, but he made his presence felt after replacing Ronaldo in the second-half as he scored his first goal for Madrid 10 minutes from time to open the scoring.

However, Atletico weren’t to be denied and Raul Garcia flicked home two minutes from time to give them a vital away goal heading into the return leg at the Vicente Calderon on Friday.