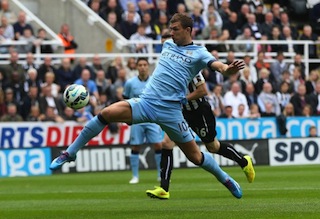 Manchester City striker Edin Dzeko on Wednesday signed a new four-year contract which will keep him at the Premier League champions until at least 2018.

The Bosnian international’s current deal had only 10 months to run and manager Manuel Pellegrini’s determination to keep the striker was fully justified by his performance as City beat Newcastle 2-0 on Sunday.

“I’m really happy here at City — it’s a second home to me so it was an easy decision to stay for the long-term,” Dzeko told the City website.

“I knew from the beginning when I started here that I wanted to stay for a long time — I can’t see any place better than here.”

Pellegrini had been full of praise for the 28-year-old — who joined City from Bundesliga side VfL Wolfsburg in 2011 — after his crucial role at St James’ Park at the weekend.

Dzeko created the opening goal for David Silva and the second came in stoppage time from one of his rivals for a place in the City forward line, substitute Sergio Aguero.

“It’s not strange for me to see him play like that because he finished last season playing very well. He has grown. He’s a team player,” said Pellegrini.

“I’m very happy for him. That’s why he is renewing his contract here — he has a very important duty in our team.”