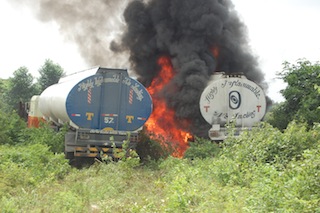 On sighting the Task Force, the suspected oil thieves abandoned their trucks with registration numbers XA 458 ABK and NSK 355 YF and fled into the bush.

A press statement issued and signed by the Joint Media Campaign Centre of Operation Pulo Shield, ‎Lieutenant Colonel Mustapha Anka and made available to P.M. NEWS, said a ‎reliable source told the Task Force that bunkering activities have‎ been going on at site since the beginning of this year.

While thanking the Special Squad of the JTF for carrying out the operation‎, the source was quoted as saying, “The‎ tankers come here every night to load their trucks with products without being challenged,” adding that, “it would will deter others from engaging in the act which he described as an economic sabotage to the Nigerian nation and hazardous to the environs.

The trucks together with illegal oil bunkering equipment were moved to a safer place by the JTF before they were set ablaze in line with its mandate and that of JTF Commander, Major General Emmanuel Atewe’s zero tolerance‎ campaign on oil theft and illegal oil bunkering.

The JTF therefore urged the general public to provide useful information on the activities of the oil thieves and illegal oil bunkering to security agencies.