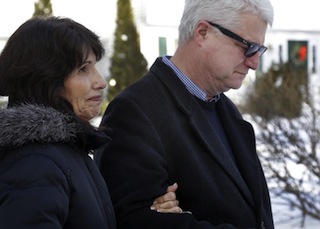 Condolences and shocked messages poured in after the Islamist group released a video of Foley’s beheading late Tuesday, including from French journalists who revealed they had been held alongside him in the past year.

Foley, 40, had been missing since he was seized in Syria in November 2012.

“We’re very proud of him. He was a courageous, fearless journalist, a very compassionate American. He was just a hero,” Foley’s mother Diane told reporters outside their New Hampshire home.

“It haunts me, how much pain he was in and how cruel this method of execution is as opposed to so many others,” said his father John. “We believe he was a martyr, a martyr for freedom.”

French journalists Didier Francois and Nicolas Henin, who were released by Syrian jihadists earlier this year, revealed on Wednesday they had been held alongside Foley.

“He was an extraordinary guy, an extremely nice companion in detention, very solid,” said Francois of Europe 1 radio, who was held with Foley from October 2013 until his release in April.

“This was someone who never fully submitted to the kidnappers. He was always thinking of others during the whole detention, notably asking for food for everyone.”

Henin of L’Express magazine said Foley had faced particular abuse from their jailers because he was American and his brother is in the US air force.

“He was a guy of great bravery,” said Henin. “He became the whipping-boy of the jailers … but remained unperturbed.”

On Twitter, fellow journalists implored users not to view the graphic video of the execution, instead sharing images of Foley in the field.

Dick Costolo, Twitter’s CEO, wrote: “We have been and are actively suspending accounts as we discover them related to this graphic imagery.”

In the nearly five-minute video, titled “A Message to America” and distributed online by known Islamic State sources, the group declares that Foley was killed after Obama ordered air strikes against IS positions in northern Iraq.

Thousands posted messages of sorrow on the Facebook site Free James Foley, while US President Barack Obama said the entire world was appalled by the execution.

“No just god would stand for what they did yesterday,” he said.

It was “increasingly likely” that a British jihadist had carried out the killing, Cameron said, adding that “far too many” Britons had travelled to the region to take part in extremism.

The International Federation of Journalists (IFJ) expressed its deep shock at “the appalling beheading.”

“This horrifying and cowardly killing of an unarmed man is another call for action to protect journalists and civilians who are brutally targeted by armed groups and terrorists” said Jim Boumelha, IFJ President.

The IFJ said Syria remains the world’s most dangerous country for journalists, with over sixty killed and some twenty still missing.

The jihadists’ video recalled the killing of Wall Street Journal reporter Daniel Pearl by Al-Qaeda militants in Pakistan in 2002.

“Our hearts go out to the family of journalist James Foley. We know the horror they are going through,” said Pearl’s mother Ruth, according to a tweet from the Daniel Pearl Foundation.

Foley was an experienced correspondent who had covered the war in Libya before heading to Syria to follow the revolt against Bashar al-Assad’s regime, contributing to news site GlobalPost, Agence France-Presse (AFP) and other media outlets.

He came to journalism as a second career, enrolling in the Medill School of Journalism at Northwestern University aged 35. He had previously instructed inner-city students and taught reading and writing to prison inmates.

“He realised that the stories he wanted to tell were real stories — stories about people’s lives -and he saw journalism as a vehicle for talking about what’s really happening in the world,” Diane Foley said in an earlier interview with the Columbia Journalism Review.

“Once again our profession has been shaken by a shameful and unacceptable act. Journalism was James Foley’s reason to live and it should never have been his reason to die.

“This is not only a personal tragedy, but an act of savagery.”

According to witnesses, Foley was seized in the northern Syrian province of Idlib on November 22, 2012.