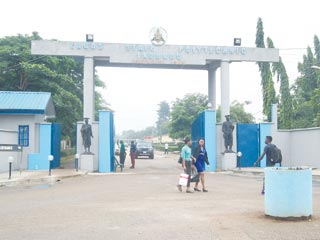 Management of the Lagos State Polytechnic, LASPOTECH, Ikorodu Campus, has moved to dismiss earlier suggestions that no development had taken place in the school for some time by giving the school a face lift.

P.M.NEWS Campus Square findings revealed that the school’s main gate has been reconstructed, while the toilets in the institution which had been abandoned for years have been fixed.

This move by the school management, our correspondent gathered, is aimed at ensuring that the students learn in a conducive learning environment.

However,  many students refused to commend the management for the new development as they believe that it had been long overdue.

Olalekan Adejumo, a student of the institution,  said: “I really don’t know the motive behind this sudden beautification of our school and the repair of our toilets which had been abandoned  for years.

“One can only hope this is not a strategy to increase our school fees  next session.”

Another student, Samuel Adekunle,  told our correspondent that from what he heard, the project was executed by one of the banks operating within the school premises.

The part two Mass Communication student of the school opined that, “I don’t believe that the management of LASPOTECH spent money to beautify the school.

“What I know and that I can tell you they did is the repairs of the toilets, changing of the old and outdated fittings. All of these became necessary because students have since stopped using the facilities,” he said.

A student, simply identified as  Adegbenro, expressed gratitude for the job well done  but added that the management waited too long to do the repairs.

“This entrance has been a mess for too long. There used to be a huge mess  at the entrance anytime it rained. But thanks to whoever is responsible for this beautification. We can now walk into the school premises without getting stained by  mud,” he said.

While the Mass Communication department has been adjudged to be the most expensive department in terms of school fees, several parts of the department had been left to rot.

Clement, a student in the department , said  that, “until recently when the school management took it upon itself to fix the toilets and replace the ceiling fans, we were already used to receiving lectures in stuffy classrooms.

“You should have been here some months back when one of the classroom in this department had only one fan. You you need to see how students struggled to sit under the fan for comfort. All that has changed now.”

One of the students who pleaded anonymity differed from others in her opinion,insinuating that the latest developments may not be unconnected to plans by the state government to woo the students ahead of next year’s election in the state.

“Personally, I believe it is a plan by the government to buy our conscience when it is time to vote next year. I am waiting patiently anyway, to see how things pan out in 2015,” she said.