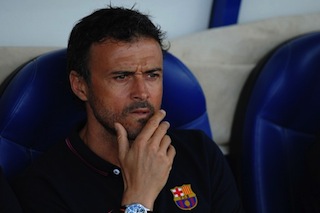 Barcelona coach Luis Enrique has said Atletico Madrid are the favourites to retain their La Liga title despite the millions spent by his side and Real Madrid in recent months.

Atletico showed their success was no one season wonder as they claimed the first domestic trophy of the season in Spain with a 2-1 aggregate victory over Real to win the Spanish Super Cup on Friday.

“The favourite for the league is Atletico,” said Enrique, whose side get their La Liga campaign underway at home to Elche on Sunday.

“It is not just out of respect for the defending champion. They continue with the same ideas from last season and they have perfected them despite changing players.

“I said last season I saw them as favourites for the league and the Champions League and they said it was a brave thing to say, but they are the clear favourites.

“Madrid are our eternal rivals and they have strengthened. It will be a very exciting championship. We have the desire having not won anything last season and no one will beat us for desire.”

Enrique is still hoping to have Neymar available for the visit of Elche despite the Brazilian striker suffering an ankle sprain in training on Thursday.

Pedro Rodriguez has returned to training after suffering from a bout of gastroenteritis and is expected to be fit for selection.