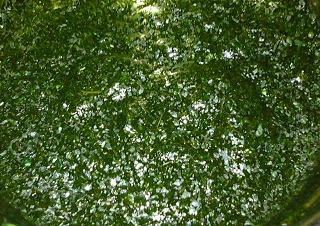 A professor of Ophthalmology at the Lagos State Teaching hospital, LUTH, Prof Adebukola Adefule Oshitelu, has laid claims that ‘Genus Corchorus’ popularly known as Ewedu in Nigeria is capable of curing the Ebola Virus Disease.

According to Oshitelu, Ewedu cures Ebola by improving an infected person’s immune system, likewise providing prevention against the deadly virus for uninfected persons.

“The qualities inside Ewedu is so much that it will kill Ebola by preventing the virus from replicating and destroying more organs in the body. This would immediately stop the symptoms such as high fever, stooling and vomiting. Ultimately, leading to the cure,” Oshitelu said.

She further advised people to consume Ewedu on a regular basis but with strict adherence to its preparation and usage.

“The way it will be prepared will be different from the normal way they cook it. It should be washed and rinsed with liquid vinegar, afterwards blend and cook with drinkable water. No salt, potash or seasoning should be added, take 25cl of the concoction a week and it would boost a person’s immunity so that they become impregnable to the virus.” Oshitelu said.

However, In a statement made by the Director General of NAFDAC, Paul Orhii who was represented by the Director of Laboratory Service, Stella Denloye, NAFDAC said it has banned illegal advertisement of herbal products and bogus claims of cure for diseases.

“Unpatriotic Nigerians who continue to engage in illegal advert of their products and those making false claims not evaluated by NAFDAC should desist from acts misleading the unsuspecting public. I want to warn and inform them that NAFDAC would deal decisively with anyone found to contravene,” Orhii said.

He noted that there was the need to institutionalise traditional medicine in the health systems worldwide including Nigeria.

He said the stigmatising of the traditional health care by modern/conventional medicine needed to stop. So much that in some countries, it is even illegal to practice it.

“Regulation is the key to ensuring that only good quality, safe and effective traditional/herbal medicines are available to consumers especially if traditional medicine and complementary medicine is to be integrated into the nation’s healthcare system,” Orhii said.