Sue me if you can, Australian negotiator tells ex-governor Sheriff 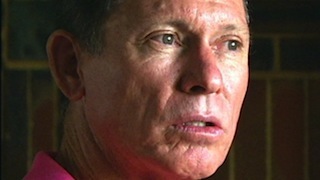 Dr Stephen Davis, the Australian negotiator reportedly appointed by the Nigerian government in the heat of the #BringBackOurGirls campaign in Nigeria, has asked former Borno State Governor, Ali Modu Sheriff, to head to court if he could muster the courage.

Davis said if Sheriff went to court, then he would reveal all evidences to show that the former governor was behind insurgency that has ravaged the northeastern part of the country.

Sheriff had in a press conference, on Wednesday, threatened to sue Davis for linking him with the Boko Haram terrorist group in Nigeria and for disparaging him.

He said he would contact his legal team to begin the processes of suing the Australian as he vehemently denied any involvement with the group and its activities.

Prior to Sheriff’s denial, Davis had revealed in an international television monitored across the world, that Sheriff and Nigeria’s former Army Chief, Azubuike Ihejirika, were responsible for the growing insurgency in the country.

He also exonerated former Head of State, Muhammadu Buhari and former Minister of the Federal Capital Territory, Mallam Nasir El-Rufai, saying the duo had nothing to do with the group.

Davis said he was moved to reveal the sponsors of the group because he could not bear the plights of those held hostage by the group.

He also revealed that leaders of the sect had informed him that Sheriff and Ihejirika were their backers.

TheCable, a Nigerian online medium, said Davis, while speaking with the medium said he would provide evidences to prove that Sheriff is connected with the terrorist group.

“He is worried, is he? He knows that if he goes to court, the evidence will be produced and he cannot escape justice.

“Let him go to court if that is what he wishes. It is his right to do so.

“He will not be able to avoid close examination and then the facts will be known.

“Good luck to him if he decides to sue me in Australia. He can’t buy the judges here.

“Truth is not for sale. Australia has zero toleration for those who might sponsor terrorism,” TheCable quoted Davis as saying.

“No one should be above the law whether in Australia or Nigeria. Justice must be served for every Nigerian killed, every girl and boy kidnapped, every girl raped, every person who has lost their home in the course of this violence.

“It seems to me the extent of involvement of every person named by Boko Haram as a sponsor should be closely and thoroughly examined by the correct authorities.

“I read his defence on the media this week. Rather than come out as a statement of facts, it read like a novel of unconvincing fiction.

“In the last 48 hours, I have been in touch with some commanders of the group and they maintain their stand on Sheriff’s involvement.

“Sheriff’s ploy of casting himself as a victim is a poor attempt at disguising his sponsorship as alleged by the Boko Haram commanders,” the medium quoted Davis as further saying.

The Nigerian government is yet to make any formal statement concerning this revelation.

Earlier this week, the country’s main opposition party, the All Progressives Congress, APC, challenged President Goodluck Jonathan to hand the duo over to the International Criminal Court for prosecution on crime against humanity.

The party also said the revelation by Davis had proven the innocence of the APC against the denigrating remarks of the ruling Peoples Democratic Party, PDP, and the Presidency linking it with the sect.

It also said the revelation had shown that it was friends of the President that are behind the sect.

It said while Sheriff was its member, other members of the party had dealt with him at arm’s length as doubted every of his moves.

The APC National Chairman, John Odigie-Oyegun, said every time the fingers were pointed at the party relating to Boko Haram, members of the APC had always challenged Sheriff and asked the Nigerian government to arrest and prosecute whoever was involved if there were evidence.

But the PDP fired back accusing the APC of being the brain behind insurgency.