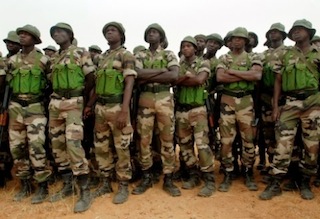 Twelve Nigerian soldiers were on Tuesday sentenced to death for mutiny after shots were fired at their commanding officer in the restive northeast city of Maiduguri earlier this year.

A nine-member military tribunal, sitting in Abuja, convicted the soldiers following the incident on May 14 when shots were fired at the commanding officer of the Nigerian Army’s 7th Division, which is tasked with fighting Boko Haram insurgents.

Court president Brigadier General Chukwuemeka Okonkwo said the sentences were subject to confirmation by Nigeria’s military authorities but added there was no doubt about the gravity of the offence.

The panel considered “its likely effect on the counter-insurgency operations in the northeast as well as its implications on national security”, he told the court.

Nigeria’s army has been under pressure to end the bloody five-year insurgency that has claimed thousands of lives, made tens of thousands of others homeless and seen the militants make territorial gains in the northeast in recent weeks.

Front-line troops have frequently complained of a lack of adequate weapons and equipment to fight the rebels.

Residents in towns raided by the Islamists have said the insurgents are often armed with rocket-propelled grenades and anti-aircraft weapons mounted on trucks and, in some cases, armoured personnel carriers.

Soldiers by contrast have at times reportedly lacked ammunition and been sent out to the bush to fight without basic communication equipment.

Last month, dozens of Nigerian soldiers refused to deploy for an offensive to try to retake the captured Borno town of Gwoza, which the Islamists claimed as part of an Islamic caliphate.

Soldiers’ wives also demonstrated at the gate of a military base in Maiduguri trying to stop their husbands from heading to Gwoza without proper equipment.

One of the protesting soldiers, who set up camp on the outskirts of Maiduguri, said at the time: “We are being killed like chickens by Boko Haram because we are not given the required weapons to fight. We say enough is enough.”

The country’s military spokesman Chris Olukolade denied the troops had mutinied and told AFP that Nigerian soldiers were “too disciplined and patriotic to indulge in this dangerous offence”.

The military has also rejected claims that hundreds of troops shouldered arms and fled their posts in border towns overrun by Boko Haram.

President Goodluck Jonathan has asked lawmakers to approve a $1 billion (750 million euros) foreign loan to upgrade the capacity of the military, which was seen as a tacit acknowledgement that troops were being out-matched.

The court martial heard that on the day in question, the soldiers from 101 Battalion opened fire at a convoy containing the 7th Division commander General Amadu Mohammed at an army medical centre in Maiduguri.

The soldiers had demanded that Mohammed speak to them after a number of their colleagues were killed in an ambush on the way back from the Borno state town of Chibok.

The previous month, Boko Haram fighters kidnapped more than 200 girls from their school in the town, triggering global outrage.

Witnesses said the soldiers became unruly and threw stones at an officer when he arrived and shots were fired into the air. Mohammed then had to take cover as they trained their guns on him but he was not injured.

“The soldiers succeeded in shooting at his staff car, thereby causing bullet impressions at the right rear door where the GOC (general officer commanding) sat,” Okonkwo told the court.

“He said thank God for the staff officer who rushed him into his car and the fact that the staff car is an armoured plated vehicle.”

Twelve were sentenced to death for mutiny, one was given 28 days’ hard labour on another count and five were acquitted. All pleaded not guilty.