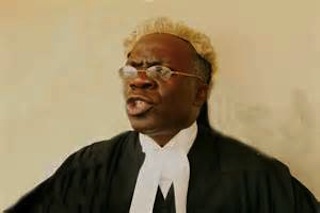 Human Rights Lawyer, Femi Falana (SAN), on Wednesday urged Nigerians to stigmatise corrupt leaders instead of celebrating them as is often obtainable across the country.

Falana made the call in Lagos while delivering a keynote address at the Annual Convention and Integrity Awards of the Coalition Against Corrupt Leaders (CACOL), an NGO.

Speaking on “Institutionalising Probity and Accountability in Governance,” Falana said that participation of the elite in voting during elections in the country was low.

Falana advised that any political party that does not take the welfare of the people seriously was not fit to be in power and must be voted out.

He also said that Nigerians must stop celebrating corrupt people and find ways to stigmatise them. He said that the government needed to institutionalise a social security scheme as part of efforts to tackle the problem.

“Corruption does not reign in countries where you have social security for citizens in place. We must build a country where people are entitled to unemployment benefits,” he said.

Speaking on churches in Nigeria and the need for accountability, Falana urged Pastors to ensure that they account for church funds and spend them responsibly.

“We must begin to ask questions from pastors using church funds to build universities that their members cannot afford to send their children to,” he said.

“This is a trend that we must change. The time has come to insist on our rights and who is right for leadership in Nigeria,” he said.

Falana however commended CACOL for its consistency and doggedness in fighting corruption in Nigeria.

Also speaking, Mr Mohammed Fawehinmi, son of late Chief Gani Fawehinmi, called for the strengthening of institutions that were fighting corruption in the country.

He said that past leaders found to be corrupt in Nigeria should be prosecuted and those indicted of corrupt practises should be barred from running for public office.

“Any Nigerian seeking to be elected or appointed into public office must be cleared by the Code of Conduct Bureau,” he said.

Adeniran said that the Integrity Awards of the organisation was to encourage those who stood out in the face of corruption in the country.