Americans refuse to hold hands with Nigerians over Ebola 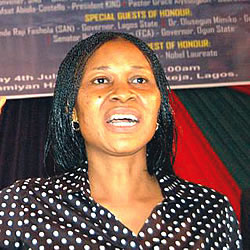 Some Americans on Wednesday refused to hold hands with Nigerians over the fear of Ebola at an event held at the United States Consulate in Lagos.

The holding of hands was engineered by Nigeria’s top human rights activist, Dr. Joe-Okei Odumakin, who asked everyone in attendance to hold hands and pledge that Africa’s most populous country will one day overcome its electoral challenges.

However, while Nigerians were already holding their hands, ‎Americans in the Consulate declined to follow and told Odumakin that it was not a good idea.

“They are saying that because of Ebola, we should not hold hands,” Odumakin told the audience.

Everyone proceeded to sing “We shall overcome” without holding hands.

The incident underscores the global fear of Ebola.

President Obama on Tuesday said Ebola was an American national security threat and announced that he will be deploying 3000 Americans to Africa to help defeat the dreaded disease that has killed more than 2400 people on the continent.

The event at the Consulate brought together Nigerians, especially those in the civil society, with some ‎Americans to discuss electoral security as Nigeria gets set for the 2015 general elections next year.

Dr. Patrick W. Quirk, a Senior conflict and stabilisation adviser within the Bureau of Conflict and Stabilisation Operations (CSO) at the United States Department of State, pledged that America will work with Nigeria for a free, fair, credible and violence-free election.

Quirk, an electoral security expert with more than 10 years of experience who chaired the interactive session along with Odumakin, said the civil society has a big role to play in preventing violence before, during and after electoral processes.

He said Nigeria would need a coordinated election security plan that can be clearly communicated to Nigerians.

To be successful, he said, the coordination must involve the Federal, state and local government levels.

Odumakin warned Nigerians not to expect much from Americans, even though they are ready and willing to help. She said Nigerians must take their destiny into their hands with a mentality shift and concrete actions.

She denied that most civil society organisations in Nigeria are corrupt, partial and therefore not credible enough to earn the respect of politicians and other Nigerians.

She said there are still bad eggs but funders can identify the good from the bad ones.