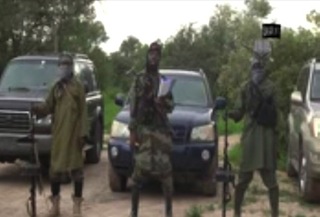 Boko Haram militants are in charge of at least 25 towns and villages in northeast Nigeria, the region’s Roman Catholic bishop has claimed, warning of a deteriorating security situation.

Bishop Oliver Dashe said 10 towns in Yobe state, the same number in Borno and five in Adawama had fallen to the rebels over the last month, as they seek to carve out a hardline Islamic state.

International assistance was now required to tackle the problem, he told the Nigerian Catholic Bishops’ Conference in the southern city of Warri, Delta state, on Wednesday.

“As a nation we are almost losing this battle because it is spinning out of control,” he added.

“The earlier we come together as Nigerians, forgetting our religious, ethnic, regional, cultural and ideological differences to face this menace the better for us.”

Nigeria’s government has denied losing territory to Boko Haram and the military has dismissed as “empty” the militants’ claim last month that one captured town was part of an Islamic caliphate.

Independent verification that militants have overrun towns and villages is hard to come by because communications have been destroyed.

Most reports have come from the thousands of residents who have fled their homes to go to other towns and cities in the northeast and wider region.

Military top brass this month admitted that the militants’ territorial ambitions were a threat to Nigeria’s sovereignty.

A series of counter-attacks have been launched in recent days, which they claim have successfully recaptured towns.

Dashe said Boko Haram-related violence had devastated the Diocese of Maiduguri, which he represents and covers all three northeast states.

The heavily armed militants were getting the better of the military, while the region was facing a humanitarian crisis because of the thousands displaced, he added.

He criticised the government for “almost inaction” and its “lukewarm attitude” in tackling insecurity, which had seen young men forcibly conscripted into the militants’ ranks and women forced to marry Islamist fighters.

“We used to think that salt is the cheapest commodity in the market, well, life is cheaper now, especially in the northeastern part of Nigeria,” he told delegates.