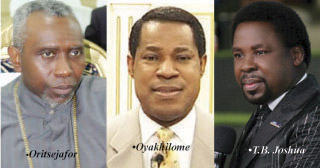 Counted among the wealthiest pastors in the world, Ayo Oritsejafor, the President of the Christian Association of Nigeria, CAN, Prophet Temitope Joshua, of the Synagogue Church of All Nations, and Pastor Chris Oyakhilome of the Believers Love World, better known as Christ Embassy, all have something in common.

They are frontline Nigerian clergymen who manage churches that boast of thousands of worshippers, sympathisers and admirers. Their words, most times, are hardly opposed by their church members and they are seen as God’s representatives on earth.

For these pastors, however, the year 2014 has been quite turbulent in various ways. While some are battling with issues of their alleged inability to handle their families like they often preach, others are having to find as much convincing explanation as they could over their involvement in allegations of money laundering, which are yet to be proven against them.

For some of these big pastors, however, this is not the first time they would be enmeshed in controversial issues and allegations. But this year it is coming in torrents.

For Ayo Oritsejafor, beginning from when he broke up with the late Archbishop Benson Idahosa and left the Church of God Mission to begin his ministry in Warri, Delta State, he has continued to grow in christendom. From being the President of the Pentecostal Fellowship of Nigeria, he became the President of the Christian Association of Nigeria, CAN, a larger body.

His emergence and activities also came with some controversies that saw bishops of the Catholic Church breaking away from the association.

Despite his explanation that his private jet was a gift from his church members, speculations that the jet was given to him by President Goodluck Jonathan are still on.

Oritsejafor, who, critics have accused of reducing CAN to a political arm of the Peoples Democratic Party, PDP, is currently enmeshed in a controversy involving the use of his private jet by two Nigerians and an Israeli in a $9.3 million cash transfer from Nigeria purportedly to purchase arms for the Federal Government in South Africa..

Oritsejafor agrees he owns the jet that was seized by South African authorities, but said he does not know anything about the controversy surrounding the huge cash since the jet was chattered by those managing it.

Some Nigerians do not believe this. Former Minister of the FCT, Mallam Nasir el-Rufai, has asked the flamboyant clergyman to look beyond his bling and answer questions about his involvement in the deal which some argue could be a failed money laundering attempt.

In the case of Prophet T.B. Joshua, the collapse of a building in his church on Friday, 12 September, that led to the death of at least 80 worshippers, has exposed him to severe criticisms. However, many, including some of his enemies, would attest to the fact that most of his predictions have come true, making him one of the most visited among pastors in Nigeria.

Besides this, he is believed to boost the tourism sector of the country with his uniquely built and attractive church. The founder of Synagogue Church of All Nations, SCOAN, with a 15,000 seating capacity, is believed to be worth between $10 million and $15 million.

Now, this prophet is facing the most challenging period of his life following the collapse of a six-storey building within his church premises. The building, with several tastefully furnished rooms and suites,  accommodated foreign visitors and worshippers of the church until last Friday when the entire building came crashing down.

Prophet Joshua attracted harsh criticisms when, days later, he announced that he was the target of terrorists, who attacked the church building. Footage of an aircraft which hovered around the church shortly before it came down was published online.

But the Lagos State Government on Thursday claimed that the building was an illegal structure which was defective from the beginning. This claim follows another by the National Emergency Management Agency, NEMA, which said the building was originally supposed to have only four floors and not six.

The South African Government also added to the controversy when it said it lost 67 citizens when the building collapsed, with many wondering why Joshua could not predict the incident.

On his part, Chris Oyakhilome, fondly called Pastor Chris, the founder of Christ Embassy, is estimated to worth between $30 million and $50 million and boasts of over 40,000 members with many, according to a report, being successful businessmen and hippy undergraduates.

A pastor and businessman, he has interests in printing, hotels, real estate and media which include LoveWorld TV network and thee first Christian TV networks

Pastor Chris is currently having a running battle with Anita, his wife and Vice President of his church in a messy divorce case.

According to reports, a major reason why Anita has made up her mind to leave her husband and father of their two children is simply because Oyakhilome, who heads the church branch in South Africa, is not measuring up as a husband and real family man.

Filing a divorce at a UK court on the ground that “the marriage has broken down irretrievably,” as well as inappropriate relationships with female members of the church, her lawyers said in the court papers: “the wife submits that her marriage to the husband has irretrievably broken down and there is no hope of reconciliation. The wife will submit that it is the husband’s unreasonable behaviours which have led to this.

“…The wife will say that they have lived separately for 16 years and over this time have drifted apart. The wife has come to realise that the husband will only visit the UK for the annual church programmes that he holds rather than to be with this wife. The wife feels that he has been unavailable as a father to their children during their developing years.

“The wife feels that their marriage suffered under the pressure of their work. They would rarely spend time together due to the husband’s unavailability. Special occasions such as Christmas, birthdays and family occasions and anniversaries pass them by and they rarely spent any time together as a family as the husband was more devoted to his work than he was to them.

“The wife feels that she has been used to portray and enhance the husband’s image as a family man when the reality is that there is no existing relationship between them.

“She feels humiliated by the way he treats her in the presence of his close female staff members and she feels that she has been taken for granted which has become unbearably stressful for her.”

Archbishop Olubunmi Okogie, who could not stomach the embarrassment the divorce case was causing to Christianity, slammed both of them for refusing to practise what they preach.