Boko Haram: Is Shekau dead or alive? Even the army cannot tell 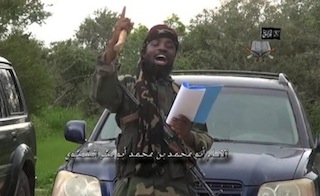 Is he alive or isn’t he? Fresh claims have emerged in Nigeria that Boko Haram leader Abubakar Shekau, or at least someone impersonating him, may be dead — and not for the first time

Rumours have been flying since last Thursday when the military tweeted that “a seriously wounded high ranking terrorist leader” had been captured during clashes in Konduga, Borno state, in the country’s strife-torn northeast.

The unnamed militant was wounded and said to have been treated at a military medical facility, top brass said, as they trumpeted their apparent success over the insurgents.

Speculation moved into overdrive at the weekend when a photograph began circulating of a heavily bearded man said to have been killed in Konduga and talk of an imminent government announcement.

“At this point, I will not be able to confirm or deny the information,” army spokesman General Olajide Olaleye told AFP on Monday. “Investigation is ongoing.

“(Defence spokesman) Major General Chris Olukolade will be able to throw more light on the issue very, very soon. Be on the watchout,” he added.

But with two previous public statements about Shekau’s death, the military has some potentially tricky explaining to do.

Police in the city of Maiduguri said on July 30, 2009 that Shekau — then deputy to Boko Haram founder Mohammed Yusuf — was one of about 200 members of the group killed during clashes.

But he then appeared less than a year later in video clips.

The security taskforce in northeast Nigeria on August 19 last year issued a statement saying Shekau “may have died” from a gunshot wound after a clash with soldiers on June 30.

There have been 10 Boko Haram videos since last September, the latest of them on August 24, when “Shekau” proclaimed the captured Borno town of Gwoza as part of an Islamic caliphate.

The military high command in Abuja has never confirmed the claims about Shekau’s death.

Some claim that he actually died in 2003 and his name has been used since by at least two others.

But with no concrete proof of Shekau’s demise provided by the authorities, rumours have persisted.

The military’s Olukolade has previously dismissed talks about whether Shekau is alive or dead as immaterial.

“That’s not the issue in this matter. They’re all terrorists,” he told AFP in an interview earlier this year.

Marilyn Ogar, spokeswoman for Nigeria’s secret police the Department of State Services, told reporters on May 13 this year: “What I know is that the original Abubakar Shekau is dead.

“The person claiming to be the national leader (of Boko Haram) is not the original Abubakar Shekau.”

Unsurprisingly given the precedents, analysts were sceptical about the latest claims.

Ryan Cummings, chief Africa analyst at Red24 risk consultants in South Africa, said it was unlikely that as Boko Haram commander, Shekau would be in the thick of battle in Konduga or anywhere else.

“A more likely scenario is that Shekau remains stationed at one of Boko Haram’s central operational and logistical bases which are claimed to either be located within Sambisa Forest or the Mandara Mountain range which straddles the Nigerian and Cameroonian border,” he added.

But Jacob Zenn, from the Jamestown Foundation think-tank in the United States, said the death of a body-double in Konduga was plausible.

“It’s important to note, however, that Shekau may have had ‘doubles’ who appeared in some videos. And the army has a record of being incorrect about claims of Shekau’s death,” he said.

“So it may be important to wait until the video from Shekau — or someone who purports to be Shekau.”