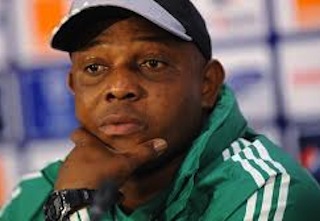 Chief Coach of Nigeria’s Super Eagles, Stephen Keshi does not see anything good in Obafemi Martins though the player is in good form for his American Major League Soccer, MLS, club, Seattle Sounders FC.

Nigerians have been calling on Keshi to look the way of Martins who had 39 caps and 18 goals for the country and give him a call up to the senior national team, but the Chief Coach, while speaking on Brila F.M. early today said that Martins has no place in his team for now.

According to Keshi, “there are other good players who can fit in to the role Martins can play in the Eagles and I believe he had paid his due for this nation in the team. So, it is my belief that Martins should give other younger players chance to showcase their talent in the Eagles.”

Keshi also reiterated his resolve not to bring Manchester City teenager, Kelechi Iheanacho to the Eagles for now, saying that the UAE 2013 FIFA U-17 World Cup Golden Ball award winner is too young to wear the colours of the Eagles.

“I think those who want Iheanacho to play for the Eagles meant well for the young boy, but to me, he still has a long way to go before he can fit into the team,” Keshi said.

Iheanacho made his debut for City in their 2014 preseason tour of the United States, scoring two goals in their first two games, but this feat doesn’t count with Keshi who said despite the preseason good outing, the Nigerian youngster is yet to fight his way to the main team of the English Premier League champions.

“He is not in the starting lineup of City. He should try and wait for his time. He has a good future ahead of him,” the Nigerian coach stated.

Celestine Babayaro is one of many Nigerians who want Iheanacho in the Eagles. Babayaro was of the opinion that the likes of “Pele, Diego Maradonna, Ronaldo and Lionel Messi all started playing for their senior national teams at a very young age.”