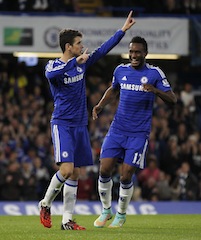 Chelsea edged Bolton Wanderers 2-1 to reach the League Cup fourth round on Wednesday.

Chelsea gave a first appearance of the season to goalkeeper Petr Cech and took a 25th-minute lead when debutant Kurt Zouma lashed home at the second attempt after Gary Cahill’s header was blocked at a corner.

Matt Mills equalised for Bolton six minutes later with a deep header from a free-kick that crept inside Cech’s right-hand post, but Oscar gave Chelsea victory in the 55th minute with a low long-range drive.

Chelsea will visit fourth-tier Shrewsbury Town in round four.

Meanwhile, Tottenham Hotspur had to come from behind to win 3-1 at home to Nottingham Forest.

Championship leaders Forest made a bright start, hitting the bar through Ben Osborn’s curler, and took the lead in the 61st minute when 19-year-old Jorge Grant tucked in a Lars Veldwijk cross.

But substitute Ryan Mason drew Spurs level with a 25-yard shot in the 72nd minute and late goals from Roberto Soldado and Harry Kane sent Mauricio Pochettino’s side through.

Goals from Tom Ince and Robbie Brady put Hull 2-1 up after Brown Ideye had given the hosts a 15th-minute lead, but Gareth McAuley equalised in the 87th minute before Saido Berahino grabbed the winner a minute later.

The night’s other all-Premier League tie went to extra time after Sullay Kaikai marked his Palace debut by making it 2-2 against Newcastle in injury time at Selhurst Park.

Arsenal were dumped out of the competition after losing 2-1 at home to Southampton on Tuesday, while Liverpool edged second-tier Middlesbrough 14-13 in a remarkable penalty shootout following a 2-2 draw at Anfield.

Southampton will visit Stoke City in the next round and Liverpool will tackle Swansea City, who beat their Merseyside rivals Everton 3-0 on Tuesday.