Why I want to be Lagos governor - Ikuforiji 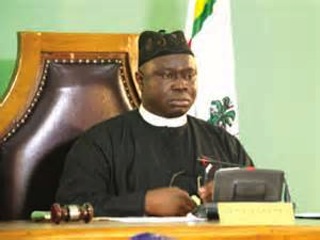 With the primary elections of the All Progressives Congress, APC, slated for 15 November and as campaign heats up, ‎the Speaker of the Lagos State House of Assembly, Adeyemi Ikuforiji, has given reasons why he would like to become governor next year.

Apart from being the most experienced candidate among all those who have signified interest, he claims he has a better deal for Lagosians, in an interview at the weekend.

‎”The main reason why I really want to be governor this time is because I think our people are still not getting the best of bargains. ‎I think I can give them a better deal than they’ve ever had before,” he said.

“I want to bring succour to the masses. I have gathered enough experience as far as governance is concerned, and I have this belief the people are yet to enjoy the dividends of democracy to the fullest. The gap between, is what I can fill,” Ikuforiji said.

He said his knack for excellence, his belief in putting smiles on the faces of the people and his conviction that life can be better for Lagos residents are the driving forces behind his move.

More importantly, Ikuforiji emphasised closeness between the led and the leaders. “I think we have arrived at that spot where Lagosians should be the major reason for governance, they should decide what they want and they should get what they want.”

When the people are more involved, he argued, the leaders are put on their toes and deliver the dividends of democracy to their people.

These changes can only be provided by a strong democrat who understands the system, he said.

The difference between him and others, he argued, lies in the fact that he has over these years led the legislature and has made necessary sacrifices to make the legislature attain the height that it has attained.

“The lacuna that exists between where we are today and where we are supposed to be to get the very best from our government can only be filled by a strong democrat as governor, by a man who is seriously committed,” he submitted.

Other candidates have either been in the civil service or the executive arm of government but lack a clear understanding of what governance is all about, he said.

Ikuforiji, who is the longest serving House of Assembly Speaker in Nigeria since the return of democracy in 1999, promised to empower the youths with training and jobs.

Apart from educating the youths snd creating opportunities for them using knowledge technology approaches, he would spend more money on critical areas to create an enabling environment.

‎”We will intensify training in that area and we will encourage all young men and women to take active interests in their lives more than they’ve ever done before. We will engage hundreds of thousands by empowering them with adequate training.

He said as a party man who has invested money and time for the APC, he enjoys the support of the l‎eadership and is confident that his time has come to take Lagos to a greater height.