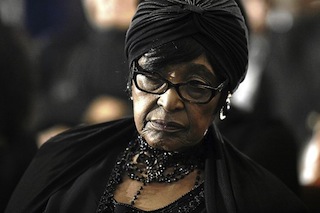 Nelson Mandela’s ex-wife Winnie Madikizela-Mandela is to be admitted to hospital to undergo surgery, her daughter said on Monday.

“Wishing my mother a speedy recovery and good luck with the surgery. Love always”, Zindzi Mandela said on her Twitter account.

The treatment will help blood circulation in the 78-year-old’s leg, according to a source close to the family.

Once a hero of the apartheid struggle in her own right, Madikizela-Mandela was previously hospitalised in 2011 for a “minor foot” operation.

Mandela, who died last year, and Winnie married in 1958 and they had two daughters. They separated in 1992 and divorced four years later.

She had tirelessly campaigned for his release during his 27-year imprisonment under apartheid.

But her image was tarnished by a series of scandals, including her links to the kidnap and murder of a young activist and a 2003 fraud conviction.

She remains an MP and a top member of the ruling African National Congress.