Bono apologizes for free U2 album on iTunes accounts 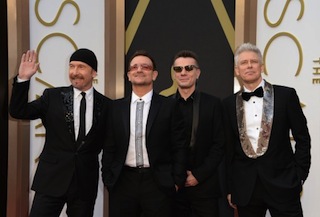 Call it a mix of ego, generosity, self-promotion and insecurity. But Bono is sorry for giving away U2’s latest album for free on iTunes accounts.

There were grumbles last month when the Irish rock band’s new album “Song of Innocence” was automatically downloaded onto Apple’s more than half-billion iTunes accounts around the world.

Among other things, some iTunes users griped that the record took up valuable iPhone storage space.

In a video interview hosted on Facebook Tuesday, Bono appeared with the other members of the band to take written questions from fans. One of them said, please, no more automatic freebies on iTunes.

“I’m sorry about that,” Bono said.

“I had this beautiful idea. Might have gotten carried away with ourselves. Artists are prone to that thing. A drop of megalomania, a touch of generosity, a dash of self-promotion, and deep fear that these songs that we poured our life into over the last few years might not be heard,” he added.

“There’s a lot of noise out there. I guess, we got a little noisy ourselves to get through it.”

Thanks to Apple, people can now remove the album from their iTunes accounts with the click of an on-screen icon.

U2 — who released some of the most acclaimed albums of the 1980s including “The Joshua Tree” and “Rattle and Hum” — could have expected major sales for a new album.

While Apple did not disclose financial arrangements for the free release, U2 has collaborated for years on products with the company.