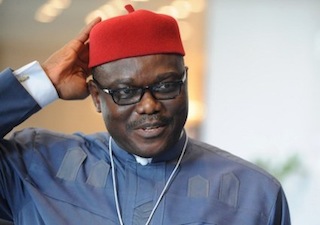 Ebonyi elders and stakeholders on Tuesday bought the PDP governorship nomination forms for the immediate past Minister of Health, Prof. Onyebuchi Chukwu, to contest the 2015 general elections.

Chief Elias Mbam, who led the stakeholders to the PDP National Headquters in Abuja, said the decision to support Chukwu was based on his antecedents.

It would be recalled that Ebonyi stakeholders had recently, at a meeting in Abakaliki, called on Chukwu to join the governorship race to succeed the outgoing Gov. Martin Elechi.

“A few weeks back Ebonyi stakeholders met and took a decision to ask Prof. Onyebuchi Chukwu to please come and serve his fatherland.

“It is in furtherance of that decision that the elders, women and youths were sent to purchase the governorship nomination and expression of interest forms to ask Prof Chukwu to come out and contest the election.

“We are proud of you for eradicating Ebola virus nationwide and we know you have the capacity to deliver and build on the achievement of our governor,” he said.

The Coordinator of Ebonyi Women Assembly, Mrs Rose Nwaku, tasked Chukwu to tackle the development of Ebonyi with the same zeal he tackled the Ebola virus if elected as the state governor.

While assuring Chukwu of the support of Ebonyi women, Nwaku expressed appreciation to Gov. Elechi and Ebonyi elders for zoning the state governorship position to Ebonyi South Senatorial District.

She, however, pleaded with the former Minister not to forget the womenfolk duringb his tenure.

Responding, Chukwu declared that he was humbled and overwhelmed by the efforts of the elders and stakeholders.

He explained that he resigned his appointment from the Federal Executive Council to heed the clarion call on him to contest the governorship election.

He applauded the contributions of the current and past administrations towards the development of Ebonyi.