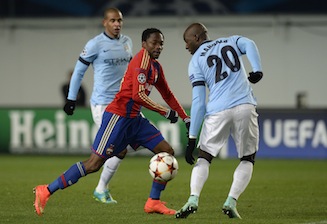 Manchester City face a massive task to qualify from Champions League Group E after letting slip a two-goal lead to draw 2-2 with CSKA Moscow on Tuesday.

The Premier League champions desperately needed a win in Moscow after an opening defeat to Bayern Munich and a draw with AS Roma, and they were coasting to victory with first-half goals from Sergio Aguero and James Milner.

But CSKA got one back after the break via substitute Seydou Doumbia, with Bebras Natcho equalising with a spot-kick with four minutes remaining.

The game was played out in sub-zero temperatures in an eerily empty Arena Khimki with CSKA serving a stadium ban as punishment for various offences including racist chanting.

Frank Lampard was ruled out for City after injuring his thigh in the win against Tottenham Hotspur on Saturday, one of five changes made by manager Manuel Pellegrini.

But it was City who deservedly took refuge from the freezing temperatures at the break two goals to the good.

As the snow began to fall tentatively, the irrepressible Aguero — scorer of all four goals in the 4-1 defeat of Tottenham — put the visitors into a 29th-minute lead.

Edin Dzeko ran onto David Silva’s pass and charged at CSKA ‘keeper Igor Akinfeev before unselfishly squaring to Aguero on his right for the Argentine striker to slot home and settle City’s nerves.

Nine minutes later Yaya Toure floated a pass over the CSKA defence to Pablo Zabaleta who nodded the ball back to Aguero.

For once City’s all-time Premier league top scorer failed to find the target, but Milner was on hand at the far post to slide the ball over Afinkeev’s line.

City could have had a third seconds later when Milner hit the post and then had a penalty shout turned down by referee Istvan Vad after being clattered by a CSKA player.

After the restart CSKA went close to reducing the deficit when Roman Eremenko’s 25-yard effort got the better of Hart but landed on the roof of the net.

In the 65th minute a finely-worked move did put them firmly back in the match, Musa driving the ball across Hart’s goal for Doumbia to pounce.

In a bid to regain the initiative, Pellegrini replaced Dzeko with Jesus Navas with 20 minutes remaining, but in a hugely disappointing finish for City, the Russians levelled from the spot after Aleksandar Kolarov brought down Doumbia, with Natcho converting the penalty.

City, who regarded the penalty decision as unfair, are left struggling on two points in third behind Roma and Bayern, who were due to meet later on Tuesday.