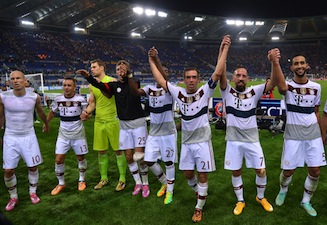 Five-time European champions Bayern Munich took a huge step towards qualification for the last 16 of the Champions League with a remarkable 7-1 rout of Roma at a stunned Stadio Olimpico on Tuesday.

Pep Guardiola’s Bundesliga leaders travelled to the Eternal City looking to draw first blood in the first of two consecutive encounters between the Group E rivals — they meet in Munich in a fortnight.

Instead the German champions, who won their last Champions League title in 2013, cemented their credentials as potential winners of this campaign.

Rudi Garcia’s men were a pale shadow of the side that had beaten CSKA Moscow 5-1 at home and battled to a 1-1 draw with Manchester City.

But even Bayern seemed astonished at how easily the Serie A high-flyers crumbled during a spectacular first half that saw the visitors take a 5-0 lead.

Dutch playmaker Arjen Robben opened the scoring with a sublime chip towards the far post of Morgan De Sanctis’s net.

Further strikes from Mario Goetze, Robert Lewandowski, a second from Robben and a Thomas Mueller penalty left Garcia’s men with a mountain to climb.

The first 45 minutes must have struck a chord with Garcia, whose Lille side suffered a 5-0 first-half rout by Bayern during a 6-1 group stage defeat in 2012 in Munich when the German side went on to lift the trophy.

By the final whistle, Roma were sorely reminded of their 7-1 defeat to Manchester United at Old Trafford in 2007.

Although Roma came fighting back in a more positive second half that saw Gervinho reduce the arrears on 66 minutes, the damage had already been done.

Guardiola on Monday had waxed lyrical about the “passion and longevity” of 38-year-old Roma captain Francesco Totti, with whom he played during a brief spell with the Serie A club.

But even Totti, who superceded Ryan Giggs as the competition’s oldest scorer when he levelled at Manchester City, could not lead the fightback.

The Bayern rout began in the ninth minute, Robben finding himself in space to the right of goal — with veteran English fullback Ashley Cole outpaced — and firing a delightful left-foot shot past De Sanctis.

Roma hit back, Gervinho just failing to make contact with a searching ball from Vasilis Torosidis and moments later seeing his strike from just inside the area blocked by a superb Manuel Neuer.

Bayern doubled their lead on 23 minutes when Goetze ran in to fire Mueller’s cheeky flick past the wrong-footed De Sanctis. It was the German World Cup hero’s sixth goal in the last five games for Bayern.

Cole then once again struggled to match the pace of Robben, who latched on to a simple pass to run down and beat De Sanctis for his second of the match.

Bayern had their fifth six minutes later when Kostas Manolas handled when he slid in to challenge and Mueller stepped up to beat De Sanctis from the spot.

Garcia replaced Totti with Alessandro Florenzi with Jose Holebas coming on in place of Cole at the half-time interval.

Within eight minutes Roma got the Olimpico roaring again but Gervinho could only hit the post while under pressure from Jerome Boateng and moments later Florenzi saw his angled strike well-saved by Neuer after being sent through.

Neuer blocked expertly on the hour mark when Gervinho, who had been bundled to the ground, got his foot to Pjanic’s deep free kick towards the back post.

Gervinho finally found the net when he headed past Neuer from close range after Radja Nainggolan’s inch-perfect delivery from the left following Juan Iturbe’s searing run.

Xherdan Shaqiri rubbed salt into Roma’s wounds when he grabbed Bayern’s seventh after being allowed to collect a rebound from a De Sanctis spill to fire into the roof of the net 10 minutes from time.