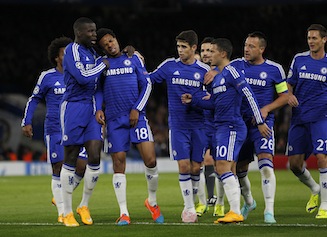 Didier Drogba scored his first goal since returning to Chelsea as Jose Mourinho’s side took control of Champions League Group G with a crushing 6-0 victory over Maribor at Stamford Bridge on Tuesday.

Drogba’s last goal for the Blues was the decisive penalty that saw Bayern Munich beaten in the 2012 Champions League final.

And, having returned to west London during the last transfer window, the Ivory Coast striker again scored from the spot to put his side 2-0 up after Loic Remy had opened the scoring in the 13th minute.

John Terry put Jose Mourinho’s team in control with a 31st minute effort and a second-half own goal from Mitja Viler followed by two goals from Eden Hazard, one a penalty, confirmed a win that extended Chelsea’s outstanding start to the season.

The only blow suffered by Premier League leaders Chelsea was an injury to Remy that could make him a doubt to face Manchester United on Sunday.

Mourinho had insisted before this game he would not allow the upcoming trip to Old Trafford to influence his team selection.

And the Portuguese manager was good to his word, naming a strong side that showed just two changes from the team that started in Saturday’s victory at Crystal Palace.

Goalkeeper Petr Cech made only his second start of the season and Kurt Zouma, the teenage centre-back, came in for his Champions League debut in place of Gary Cahill.

With Diego Costa still injured after suffering a hamstring injury on international duty with Spain, Remy was again handed the responsibility of leading the attack.

It was another opportunity for the France international to demonstrate Chelsea have the resources to cope with the loss of Costa and Mourinho will have drawn satisfaction with the way Remy broke the deadlock.

Picked out by an excellent through ball by Terry, Remy advanced from 30 yards, cutting in from the right before drilling a low, left foot shot inside the far post for his second goal since arriving from Queens Park Rangers on transfer deadline day.

That, though, was the forward’s last meaningful contribution with Remy pulling up immediately holding his groin, prompting the introduction of substitute Drogba.

Mourinho had warned Drogba was unable to complete 90 minutes after the 37-year-old had struggled to make an impact in Chelsea’s opening Champions League group game against Schalke.

On this occasion, however, it took the striker just seven minutes to register his presence.

That left Maribor facing a daunting task and worse was to come for the Slovenian side.

Terry added a third goal after a lightning break following a Maribor corner.

Hazard picked up a long clearance and broke into the Maribor half before laying the ball off to Cesc Fabregas whose low cross was met inside the six-yard box by Terry, who had raced the length of the pitch to join the attack.

Having reached half-time in total control, the only question was whether Chelsea would maintain the tempo after the break.

They were helped when Viler turned the ball into his own net from Hazard’s cross in the 54th minute.

Maribor were presented with the chance to reduce the deficit when Nemanja Matic clumsily barged into Ibraimi to concede a penalty but the Maribor striker struck the post with his effort from 12 yards.

Chelsea’s dominance was confirmed when Hazard converted the third penalty of the evening after Branislav Ivanovic had been tripped by Zeljko Filipovic in the 77th minute before wrapping things up with a fine individual effort in the closing seconds.