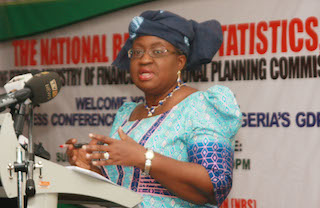 Dr Ngozi Okonjo Iweala, Minister of Finannce, during her address

Federal Government says it has saved N160 billion in salaries after weeding out 60,000 ghost workers from the service using the Integrated Personnel and Payroll System (IPPS).

The Minister for Finance, Dr Ngozi Okonjo-Iweala said this in Abuja on Tuesday at the ministry’s annual ministerial press briefing.

She said that the ministry would forward the names of those suspected in salary scam to the Independent Corruption and Practices Commission (ICPC) for further action.

“Now many people will ask who those responsible for these ghost workers? Because the ministry of finance is not an investigating agency, we have gathered all our facts and submitted them to ICPC to trace them and bring them to justice.

“We are willing to continue to work with ICPC to give them any information they need in order to clean up the system.

“So this is a sample of what we are doing to show transparency and accountability in the management of public funds.

“It is an overwhelming problem sometimes, but we will not relent because if we say we will relent, who will fight it for us,” the minister told newsmen.

He said that the GIFMIS “is an IT-based system for budget management and implementation”.