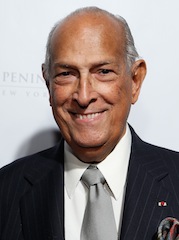 Tributes poured in on Tuesday for the Dominican-born designer, who moved to New York in the 1960s and defined American fashion over five decades, creating a multi-million-dollar fashion house.

He died at home in Connecticut on Monday, surrounded by friends and family. He was 82 and had been diagnosed with cancer in 2006.

“He died exactly as he lived: with tremendous grace, great dignity and very much on his own terms,” said step-daughter Eliza Bolen and son-in-law Alex, executives at his company.

“While our hearts are broken by the idea of life without Oscar, he is still very much with us,” the pair wrote, in a handwritten note posted on the company website.

“Through Oscar’s example, we know the way forward. We will make Oscar very proud of us by continuing in an even stronger way the work that Oscar loved so much.”

De la Renta was one of the world’s most eminent designers, and possessed a mastery of European couture.

His couture and ready to wear, with their signature romantic glamor, were favored by first ladies from Jacqueline Kennedy to Michelle Obama, and Hollywood stars like Sarah Jessica Parker.

Former president Bill Clinton and wife Hillary, who is tipped to run for the White House in 2016, paid tribute to a “dear friend.”

“His singular talent and exquisite taste elevated American fashion, and his warmth and friendship will be missed by our family and all whose lives he touched,” the Clintons said.

Former first lady Bush said she would miss “Oscar’s generous and warm personality” and former first lady Nancy Reagan, 93, said America had lost “a brilliant, enduring talent and a true gentleman,” and that she had lost a friend of nearly 50 years.

In Santo Domingo, President Danilo Medina declared a national day of mourning for the designer who also had a home in his birth country. “His departure leaves a void that is just impossible to fill,” Medina said.

The fashion world paid tribute to the friend and artistry of the two-times president of the Council of Fashion Designers of America, who married European sophistication with American cool.

Vogue editor in chief Anna Wintour wrote a deeply personal tribute, calling de la Renta “everything you could want a friend to be” and saying that he had decided to stop treatment last week.

“His last words to me were I love you, and I said I love you back,” she wrote of seeing him last weekend in Kent.

Parker, whose character Carrie in “Sex and the City” famously modeled a de la Renta gown in a pre-wedding Vogue photo shoot, mourned the loss of the “beloved and resplendent” designer.

Born on July 22, 1932 in the Dominican Republic, de la Renta studied art in Madrid and worked as an apprentice to Cristobal Balenciaga before embarking on his own career.

In 1960, he become an assistant at Lanvin in Paris, where he embedded himself in the world of haute couture before moving to the United States to work for Elizabeth Arden.

He created his eponymous label in 1965 and became one of the most lauded New York designers, helping to put American fashion on the map and inspiring a generations of younger designers.

He created clothes of timeless elegance, regal glamor and sophistication that were a hit with Manhattan ladies who lunch, Hollywood actresses and members of royalty.

He became a US citizen in 1969 and was the first American designer appointed to a prominent role at a European house, from 1993 to 2002 designed haute couture collections for Pierre Balmain.

His built up a hugely successful, family-run company that produced two runway shows a year in New York, ready to wear, accessories, fragrances, childrenswear, bridal wear and a home line.

Popular and charming, de la Renta forged close friendships and entertained generously at home in New York, Connecticut or the Dominican Republic with people from all walks of life, from the Clintons to Henry Kissinger and the late writer Truman Capote.

He is survived by his second wife, an adopted son and three step-children.