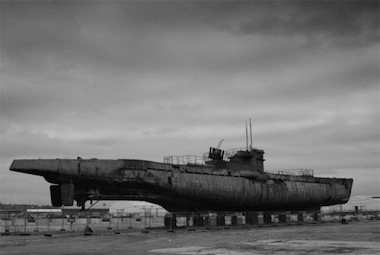 A German U-Boat in dry dock in Britain

Two sunken ships from World War II — a German U-boat and an American merchant vessel — have been found deep in the ocean off the coast of North Carolina, officials said Tuesday.

Researchers led by the National Oceanic and Atmospheric Administration’s Office of National Marine Sanctuaries discovered the vessels about 30 miles (48 kilometers) from shore.

The discovery of the German U-boat 576 and the freighter Bluefields offers “a rare window into a historic military battle and the underwater battlefield landscape of WWII,” NOAA said.

The ships were found 240 yards apart.

They battled on July 15, 1942 when a convoy of merchant ships being escorted from Norfolk, Virginia to Florida was attacked by the German submarine.

“The U-576 sank the Nicaraguan-flagged freighter Bluefields and severely damaged two other ships,” NOAA said.

“In response, US Navy Kingfisher aircraft, which provided the convoy’s air cover, bombed U-576 while the merchant ship Unicoi attacked it with its deck gun.”

Both ships were lost within minutes and sank to the seabed, but only one, the German boat, suffered casualties, 45 in all.

The wreck site is considered a war grave for the German crew and is protected under international law.

“The Federal Republic of Germany is not interested in a recovery of the remnants of the U-576 and will not participate in any such project,” the German Foreign Office said in a statement.

“They are under special protection and should, if possible, remain at their site and location to allow the dead to rest in peace.”