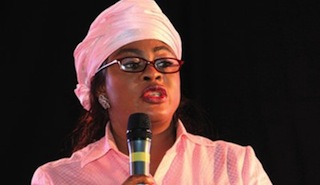 Stella Oduah: contesting for the Senate

A Federal High Court in Lagos, western Nigeria, will deliver judgment on 27 October in a suit filed against the Nigerian Civil Aviation Authority (NCAA) by Media Rights Agenda (MRA) and the Public and Private Development Centre (PPDC) over the agency’s refusal to provide them with the procurement documents for the purchase of two bullet proof BMW cars allegedly for former Aviation Minister, Mrs. Stella Oduah.

Following a motion exparte they filed before the court on 6 December over the refusal of the NCAA to make the documents available to them, MRA and PPDC obtained leave of the court on 27 March 2014 to apply for the following reliefs:

“A declaration that the failure and/or refusal by the NCAA to disclose or make available to them the information they requested by their letters to the NCAA dated October 21, 2013 amounts to a violation of their rights of access to information, established and guaranteed by Sections 1(1) and 4(a) of the FOI Act;

“A declaration that the failure and/or refusal by the NCAA to disclose or make available to them the information they requested amounts to wrongful denial of access to information under Section 7(5) of the FOI Act;

“A declaration that the disclosure of the information they requested will not interfere with pending or actual and reasonably contemplated law enforcement proceedings conducted by any law enforcement or correctional agency;

“A declaration that the disclosure of the information they requested will not interfere with pending administrative enforcement proceedings conducted by any public institution;

“A declaration that the disclosure of the information they requested from the NCAA would not in anyway obstruct any ongoing criminal investigation;

“A declaration that the budgetary allocation for the procured vehicles is neither contained in the approved 2013 Budget of the NCAA nor published as part of the 2013 Budget of the Federal Republic of Nigeria and as such cannot be the basis for the refusal to provide the information requested by the organizations; and

“A declaration that the public interest in disclosing the requested information outweighs whatever injury the disclosure of the information to the organizations may cause under Section12 (2) of the FOI Act.

NCAA’s Counsel, Okpoko, had filed a notice of preliminary objection, contending that MRA and PPDC did not serve the NCAA with a pre-action notice before filing the suit in court, as provided in Section 24(2) of the Nigerian Civil Aviation Act, 2006. The judge directed that the objection and the substantive suit be heard together.

Okpoko argued that the failure to issue the pre-action notice makes the suit defective. Besides, he said, MRA and PPDC addressed their letters of October 21, 2013 to the Director-General of the NCAA, arguing that in effect, it was not a request made to the NCAA.

He contended that the refusal by the NCAA to give the documents to the two organizations did not amount to a denial of access to information in the light of Section 12(1)(a)(i)(ii)(vi) of the FOI Act as there are various legislative, administrative enforcement proceedings and criminal investigations into the purchase of the two BMW bulletproof vehicles by the House of Representatives Committee on Aviation, which renders the information exempt from disclosure by the Act.

Oladapo, Lawyer to MRA and PPDC countered. She argued that giving the NCAA 30 days’ pre-action notice, as argued by their lawyer, would result in the organisations losing their statutory and constitutional rights of access to court as the FOI Act gives them 30 days from the date of refusal of access, to go to court.

On the claim that the requests for information were made to the Director-General and not the NCAA, Oladapo noted that the FOI Act allows an applicant to make a request to a public official who has custody of the required information.

Besides, she said, it was clear from the official stamp of the NCAA on the acknowledgement on the two letters of request sent by MRA and PPDC that the requests were received on behalf of the NCAA.

Oladapo also argued that contrary to the NCAA’s claim, the requested information is not exempted from disclosure by the FOI Act as it was not compiled by the NCAA for any administrative enforcement proceedings or by any law enforcement or correctional agencies for law enforcement purposes. Instead, she said, it was done or ought to have been prepared in the normal course of business of the NCAA.

She said it therefore followed that the disclosure of the information compiled in the ordinary course of business of the NCAA could not in any way interfere with any investigation whatsoever or with any pending criminal investigation.

Oladapo accused the NCAA of merely seeking to hide under the exemption clause in the FOI Act to defeat the ends of justice.

Besides, she said, it is not sufficient for the NCAA to merely state that it is denying the organizations access to the information requested just because it is relying on section 12 of the Act as the onus is on it to clearly state how the exemption under Section 12 of the FOI Act applies to the circumstances.

Oladapo contended that for the NCAA to validly rely on the exemption, it must show the detrimental effects of disclosing the information requested or demonstrate how such disclosure will adversely affect it.

She argued that in any event, the public interest in disclosing the information sought by MRA and PPDC outweighs whatever injury the NCAA might suffer as a result of any disclosure.

Although served with all the court processes, the Attorney-General of the Federation never made any appearance in the proceedings.

Judgment day has been fixed for 27 October.