AFCON 2015: CAF blasts Platini for interfering in its affairs 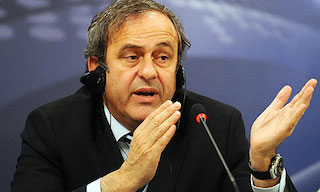 Confederation of African Football (CAF) has questioned the interference of Michel Platini, President of the Union of European Football Association (UEFA), in the postponement of AFCON 2015.

In a statement issued by CAF, the African football body said Platini, in a televised broadcast on the evening of Sunday, 19 October 2014, found it necessary to question the scheduled date of the Orange Africa Cup of Nations Morocco 2015.

The issue which has been hotly debated and has been in the public domain following a request for postponement by the Kingdom of Morocco due to the Ebola Virus Disease outbreak in some African countries.

CAF said: “On this issue, many speakers, including Mr Platini, have been making reference to the World Health Organization (WHO) to justify their support for a deferral of the championship.

“This is without any reference to a single recommendation of that organization that the postponement of any sporting event on the African continent or outside, in other countries where cases are reported, with which the CAF has been in constant contact since the beginning of the epidemic on the continent,” the statement said.

CAF noted that apart from the three countries heavily affected by the epidemic namely; Guinea, Sierra Leone and Liberia, where the WHO has clearly indicated to CAF on the need to avoid huge gatherings, that measure for now only applies to no other country on the continent.

“CAF under the leadership of its President, Issa Hayatou, has always promoted free expression within it. Far from it therefore, claim to deprive anyone latitude to express themselves.

“But we must beware of what appears in every way as interference by a president of a Confederation, in cases involving first and foremost Africa and CAF”.

CAF then told Platini that it does not interfere in the matters of UEFA because of its principle. “Under the principle of non-interference required to comply, CAF has refrained so far to comment on some issues on the managing of European football or any other continent.

“Despite the risks involved in armed conflict in Ukraine, a country where a civilian plane was shot down killing nearly 300 people, UEFA did not consider it necessary to exclude Ukrainian clubs from its competitions as a security parameter by hosting games outside this nation, as treacherously raised once it is about Africa”.

“CAF hereby reaffirm the importance it attaches to respect of its sovereignty and does not intend to let anyone interfere in the management of its affairs,” the statement read.