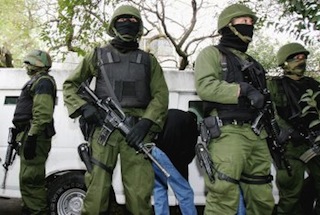 Mexican soldiers executed at least a dozen people who surrendered after a gunfight in June between troops and suspected criminals, a government human rights official said Tuesday.

The extrajudicial killings accounted for most of the 22 deaths recorded from the incident, which occurred in the central town of Tlatlaya on June 30, said Raul Plascencia, head of the National Human Rights Commission.

The execution toll was higher than the one given by the government, which said soldiers had illegally killed eight people who surrendered following the firefight.

“Twelve uninjured people are suspected of being deprived of life by military personnel, including two adolescents,” Plascencia told a news conference.

He said the number of those wrongly killed might be even higher, as three bodies were tampered with after the firefight in the town, located in the violence-plagued Tierra Caliente region 240 kilometers (150 miles) east of Mexico City.

One witness in September said the gun battle itself had left only one dead, and the other 21 were killed in cold blood by the soldiers — including his 15-year-old daughter.

The eight soldiers involved in the incident are being detained in military jail. Three of them are charged with aggravated homicide, and one of them with covering up the crime.

News of the executions sparked a scandal in Mexico, normally inured to abuses by security forces fighting organized crime.

It also adds to the shock surrounding a more recent case of 43 students who went missing in the southern town of Iguala in late September. They were allegedly taken away and killed by police linked to a drug cartel.

Several protests have taken place over those disappearances. In the latest, 500 teachers set fire Tuesday to a political party office in the capital of Guerrero state, Chilpancingo. The students had attended a rural teachers’ college in the state.

Armed with pipes and sticks, the protesters burst into in the state headquarters of the Democratic Revolutionary Party demanding the resignation of state governor Angel Aguirre.

The protesters burned computers and documents but no one was hurt.

Authorities have found several mass graves in Iguala but say 28 sets of remains examined so far do not correspond to the students.