Shots that shattered the calm of Canadian democracy 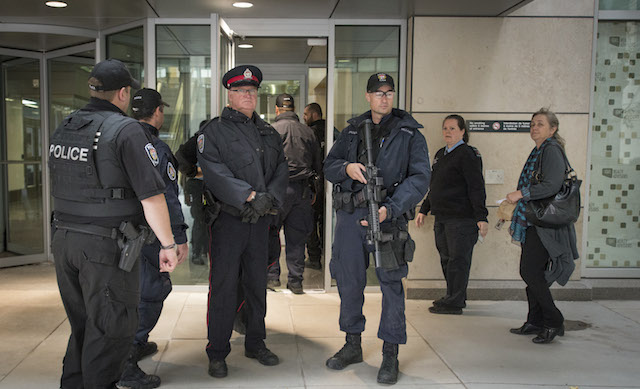 Heavily armed police officers prepare to enter a building on the edge of a restricted zone in Ottawa, Ontario after multiple shootings on October 22, 2014.

Where there had been stillness and dignity — two Canadian soldiers standing ram-rod straight by a war memorial in silent honor to their fallen comrades — now there was motion and pain.

The large young man’s body lay limp in a huddle of paramedics as they battled to massage his heart back to life, with tourists and reporters looking on, and dozens of police descending on the scene.

An ambulance pulled up and the young soldier was picked up from a pavement that normally holds wreaths laid by Canadian dignitaries and honored guests and loaded onto a stretcher.

Across Parliament Hill, the bluff overlooking the Ottawa River and the Rideau Canal that holds Canada’s seat of government, all hell was breaking loose — police shouting, armored cars rolling up.

The gunman who had cruelly cut down the young man in ceremonial uniform had run off, and now the hunt was on. Gunshots rang out again, this time in the halls of parliament.

Adam Vaughan, a member of the House of Commons, was in a staircase when he heard shots fired on the floor above him.

At first he thought the noise was nearby construction work, but then chaos erupted.

“When I walked out of the stairway, security was running in every direction and I was pinned against the wall by one security person,” he told AFP by telephone from a secure room in the building.

“We heard all of the shots go off and there was a volley of shots that happened and I was underneath the hallway and I was immediately taken into a secure area and I have been in lockdown since then.”

Vaughan said two colleagues saw the shooter who stormed the building, known as one of the most world’s most open legislatures, a symbol of parliamentary democracy.

They described the wandering assailant as a man with a long beard wearing a scarf and what might have been body armor.

Shots erupted, echoing off the hard stone walls of the Gothic palace. A bullet grazed one woman, a security officer was wounded, but the police were close behind.

The shooter came through the front entrance, up a few steps into the main lobby and beyond to the Hall of Honor and towards the library — the only original part of the building not destroyed by fire a century ago.

Prime Minister Stephen Harper was meeting members of his party at a caucus meeting in a nearby room. He was hustled away to safety as officers from various forces drew their guns.

One staffer saw the gunman through the library glass doors — stout, wearing a hoody and brandishing a long gun like a shotgun or rifle.

Police yelled instructions, pulled some to safety in secured areas, sent others who could escape scurrying into the sunshine, over lawns and out of the complex to police barricades beyond.

“I didn’t wear my evacuation shoes today,” joked one prime ministerial aide, but the mood of the tactical officers shepherding the crowd was deadly serious: “It’s not safe, get indoors.”

Once clear of the building, the sounds of gunfire subsided but the rumor mill was roaring into life. Reports, later debunked, spoke of a shooting at a nearby mall. At one point, police said shooters were on the roof.

A young man called Derrick claimed to have been sitting by a man ranting about the West’s air strikes on jihadists in Iraq and Syria, declaring he wanted to see the “world burn.”

Police took him away as a witness.

Shortly afterwards, police announced that the shooter was down, shot by police before he could kill again, and an unsettling silence descended on the heart of the city.

Shops and offices in the downtown core were evacuated and shuttered in a two-kilometer (one-mile) radius. Doors were locked. Streets were empty, decked with miles of yellow police ribbon.

Police took up positions at key buildings, defense headquarters, the finance department and Supreme Court to keep watch. Only the war memorial had lost its silent guard.