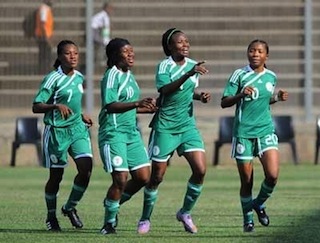 In the semi-final match played at the Sam Nujoma Stadium, Asisat Oshoala scored twice in the first half to keep the six-times African champions in the driving seat.

The star player of the 2014 FIFA U-20 Women’s World Cup in August opened scores in the 38th minute after a great run and a shot helped in by a defender.

Six minutes later, the most impressive player at the youth championship in Canada ensured her team would be making a return to Canada in June with the second goal.

South Africa came back into the game in the 68th minute after a disputed goal halved Nigeria’s lead, even though it was not just enough as the Falcons hung on.

The Nigerian side thus kept up the record of qualifying for every FIFA Women’s World Cup since 1991, a record matched only by Brazil, Germany, Norway, Sweden and the U.S.

Nigeria will meet the winners of the other semi-final fixture between Cameroun and Cote D’Ivoire on Saturday for a chance to win the AWC title a record seventh time.

They had won the competition almost every two years since its inception in 1998, except in 2008 and 2012 when Equatorial Guinea won the titles.