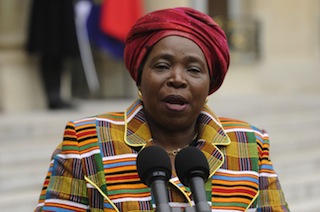 The Chairperson of the African Union Commission, Dr Dlamini Zuma, is to embark on a visit to Liberia, Guinea and Sierra Leone to assess the impact of Ebola Virus Disease in those countries.

A statement issued by the AU Information and Communication Unit in Addis Ababa on Wednesday said the visit would enable the commission to bolster its response to the Ebola epidemic.

It said Zuma would be accompanied by the Executive Secretary of the UN Economic Commission for Africa, Dr Carlos Lopes, and the President of the African Development Bank, Dr Donald Kaberuka.

“The AU commission chairperson and the delegation will meet with the heads of state and government of the affected countries to express solidarity.

“The meeting will suggest ways to accelerate the fight against the Ebola Virus Disease and evolve measures to alleviate the socio-economic consequences of the disease outbreak,” it said.

The AU Commission had, earlier written to African heads of state and government to appeal for 500 more medical volunteers.

The AU Commissioner for Social Affairs, Dr Mustapha Kaloko, had visited the three affected countries and sought assistance from Nigeria and Ghana in the efforts to stem the epidemic.

The commission had deployed about 100 volunteer health workers to Liberia and Sierra Leone under the African Union Support to Ebola Outbreak (Operation).

The commission said that it would soon deploy another batch of health workers to Guinea where the disease first broke out in March.