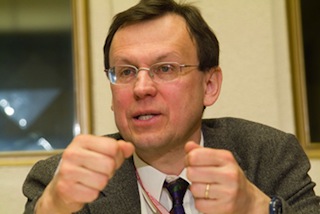 Dr Mario Raviglione, WHO Director of the Global TB Programme

The World Health Organisation (WHO) said on Wednesday that nine million people were infected by tuberculosis (TB) in 2013, while 1.5 million died, including 360,000 people who were HIV positive.

WHO in a latest report released in Geneva, said the world was fighting a difficult battle against the spread of tuberculosis.

It revealed that there was greater number of cases than previously estimated amidst shortfall in research funding.

The report, entitled,’ Global Tuberculosis Report 2014′, stated that the mortality rate from TB had continued to fall and dropped by 45 per cent since 1990.

This development, WHO said, had kept the world on track to meet the Millennium Development Goals (MDGs) target of reversing TB incidence.

The world body added that “at the same time, the number of people developing the disease is declining by an average 1.5 per cent per year.

“An estimated 37 million lives have been saved through effective diagnosis and treatment of TB since 2000″, it said”.

In a message marking the report’s launch, Dr Mario Raviglione, WHO Director of the Global TB Programme, applauded the data collection efforts by member states, noting that it was helping the UN agency to draw a broader and clearer picture of the global epidemic.

“Following a concerted effort by countries by WHO and multiple partners, investment in national surveys and routine surveillance efforts have substantially increase,” Raviglione said.

“This is providing us with much more and better data, bringing us closer and closer to understanding the true burden of tuberculosis,” he added.

Although higher than expected, the overall figures fall within “the upper limit of previous WHO estimates,” the WHO said.

It stated that in spite of this, a “staggering” number of lives are being lost to the“second biggest killer disease from a single infectious agent” and that “insufficient funding is hampering efforts to combat the global epidemic”.

Against that backdrop, it stated that the multidrug-resistant TB (MDR-TB) crisis continues to wreak havoc through “severe epidemics” affecting developing countries, particularly in Eastern Europe and Central Asia.

WHO said that in 2013 there was an estimated 480,000 new cases of the difficult-to-treat strain while extensively drug-resistant TB (XDR-TB), an even more antibiotic resistant strain of the disease, has spread to 100 countries.

“The progress that has been made in combatting MDR-TB has been hard won and must be intensified.

Containing and reversing the epidemic requires immediate and sustained efforts by all stakeholders,” Dr Karin Weyer, WHO Coordinator for Laboratories, Diagnostics and Drug Resistance stated in the report.

He added that in countries such as Estonia and Latvia, with universal access to rapid diagnostics and treatment, the number of MDR-TB cases had fallen “significantly”.

“The gap between detecting and actually getting people started on treatment,” she said is widening”.

“We urgently need increased commitment and funding to test and treat every case,” Weyer said.

The report also spotlights the ongoing challenge posed by the HIV and TB “co-epidemic” which affected an estimated 1.1 million people in 2013.

The overall number of TB deaths among HIV-positive people, it added, had been falling for almost a decade

The report however noted that antiretroviral treatment, preventive therapy and other “key interventions” needed to be scaled up.

Amid the swarm of data and figures, the report issues a critical warning regarding the state of funding for the development of new tools to combat the global TB epidemic.