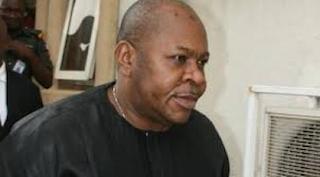 The Economic and Financial Crimes Commission, EFCC had charged Mrs Rosulu along with Ajudua for defrauding Bamaiyi between November 2004 and June 2005 while he was in prison.

Other suspects involved in the scam and who are on the run are Alumile Adedeji (a.k.a Ade Bendel), Princess Hamabon William and one Mr. Kenneth.

The EFCC alleged that Ajudua and his accomplices had falsely claimed that the payments represented the professional fees charged by Chief Afe Babatola, SAN, to handle Bamaiyi’s case in court and to facilitate his release from prison.

The commission also alleged that Ajudua claimed that $1million out of the money collected from Bamaiyi would be used to assist Justice Olubunmi Oyewole, who was initially handling the matter, to offset the payment of the hospital bill of his father who, Ajudua falsely claimed, was on admission at the Saint Nicholas Hospital in Lagos, for an undisclosed ailment.

Ajudua had earlier lost his bid to stop the trial after the Lagos Division of the Court of Appeal dismissed his application challenging the competence of the charge and the jurisdiction of the Lagos High Court to hear the matter.

Ajudua through his lawyer, Olalekan Ojo subsequently filed several motions urging the court to quash the charges on the ground that some of the counts were defective.

While Ajudua’s motions are still pending before the trial judge, Justice Oluwatoyin Ipaye, Mrs Rosulu’s lawyer, Bamidele Ogundele through a motion dated 16 October prayed the court for separate trial on the ground that the plethoral of motions filed by Ajudua was likely to delay her own trial.

Although the motion was opposed by Ajudua’s counsels, Olalekan Ojo and the EFCC prosecuting counsel, Saidu Atteh, the court upheld the prayers of Mrs Rosulu insisting that constitution guarantees her speedy and fair trial.

Justice Ipaye subsequently ordered the EFCC to consider filling a further amended charge to reflect the ruling of the court.

She adjourned the matter till 27 November for continuation of trial.

Ajudua was discharged of a similar fraud charge last week by Justice Kudirat Jose after the EFCC failed to produce some foreign key witnesses in another $1.69m fraud allegation.