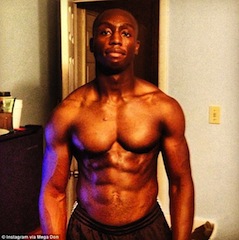 A suspect who climbed over the White House fence Wednesday was nabbed by Secret Service agents and dogs, a spokesman for the elite agency said.

“At approximately 7:16 pm (1116 GMT), an individual climbed the north fence line of the White House,” the spokesman said.

The fence climber was identified as 23-year-old Dominic Adesanya from Marlyand, near the US capital, the spokesman said.

“Charges are pending. Adesanya was unarmed at the time of his arrest.”

Video on local media appeared to show a man being intercepted by officers before he had a chance to reach the White House.

“The subject is being transported to a local hospital for evaluation,” the Secret Service spokesman added.

Adesanya’s father later told ABC 2 that his son had been arrested at the White House before and that he wanted to speak to the president about how people were out to get him. The father said that the family had tried to get him help.

Adesanya’s last post to Instagram on Tuesday showed an I Voted sticker captioned ‘Voted for this B #ImpeachObama.’
Other photos show him in action for Stevenson University in track and field, or showing off his physique in shirtless selfies.

It was reported that Adesanya also seemed to have an obsession with the Rothschild family, in particular Nathaniel Philip Rothschild, the British-born Swiss financier.

On a LinkedIn page with zero connections, in place of a job title, he describes himself as an ‘American Slave’ and rants about the Rothschild banking family.

On September 19, another man, Omar Gonzalez, jumped the White House fence and allegedly sprinted across the lawn and entered the building with a knife in his pocket.

Gonzalez has been indicted on two counts of “assaulting, resisting, or impeding” US Secret Service agents.

In jail since his arrest, Gonzalez is an Iraq veteran reportedly suffering from post-traumatic stress disorder.

This and other security lapses sparked withering criticism of the Secret Service and led to the resignation of the head of the elite presidential protection agency.