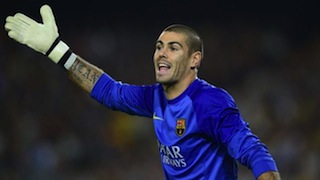 The 32-year old Valdes, who left Barcelona at the end of last season after spending his whole career at the Catalan club, is recovering from a major knee injury which scuppered a proposed move to Monaco.

Valdes, who has been capped 20 times by Spain, tore the anterior cruciate ligament in his right knee in March and underwent surgery which ruled him out of the rest of the season as well as the World Cup.

“Manchester United manager Louis van Gaal has offered the 32-year-old former Barcelona goalkeeper Victor Valdes a chance to complete his rehabilitation from a knee injury and to work his way back to fitness with the club,” United’s statement said.

“Valdes, a free agent, will have his recovery supervised by the United medical staff before training with the first team, as he bids to regain full fitness,” the statement added.

Van Gaal gave Valdes his Barcelona debut as a 20-year-old in 2002, but the keeper played under the Dutchman for just six months before the manager left the Camp Nou.