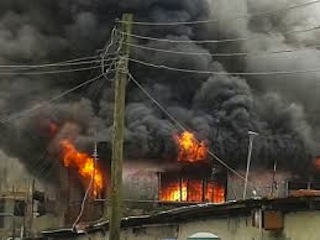 Property worth millions of naira were lost to fire disaster which occurred at Better Life plank section of Bodija market in Ibadan, the Oyo State cipital, western Nigeria, on Thursday.

The fire disaster which started around 12:30 a.m. was said to have destroyed about 50 shops.

However, prompt response from the men of fire service in the state helped to prevent the fire from spreading to other parts of the market.

Most market operators who spoke to P.M.NEWS on the incident could not say what caused the inferno.

Baale Onipako of the market, Chief Ezekiel Agbwola, called on the government to assist those wholst valuables in the disaster.

“I was called on my phone immediately the incident happened and I left my house and came down to see things by myself. I felt bad when I saw our property destroyed by fire. But I must thank the men of fire service who responded on time. I saw them working hard to put out the fire. If not for their prompt response, the situation would have been worse than this,” he said.

A furniture maker whose shop was also razed down, Mr. Segun Okeowo, said that he lost some furniture doors and chairs which the owners had paid for.